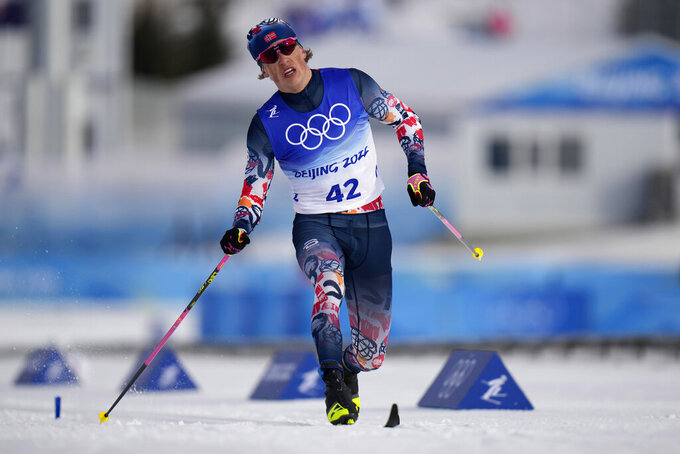 ZHANGJIAKOU, China (AP) — The Russian athletes out-skied Iivo Niskanen of Finland in the opening cross-country ski race of the Beijing Olympics, but the Finn took control of the 15-kilometer cross-country race and proved his dominance in classic skiing.

“After skiathlon, the Russians were so strong that I have to say that (Alexander) Bolshunov lived in my head five days after that, but now he’s moved away,” Niskanen said. “I was so worried about the speed (in the skiathlon), but classic 15km has been a perfect distance for me.”

Niskanen crossed the line and collapsed, spread eagle, with a time of 37 minutes, 54.8 seconds. It was his third Olympic gold. He won the 50km classic race in Pyeongchang and the classic team sprint at the 2014 Sochi Games.

“Actually I felt so strong today and it was under control the whole race," Niskanen said. “This victory means a lot to me. I was fourth, 0.2 seconds behind the medal in Sochi, at this distance, and it’s been a long eight years to wait for this race again in the Olympic program."

Bolshunov came in 23.2 seconds back to earn silver.

“On one hand, I am happy. But on the other, I was still aiming for the victory," the Russian athlete said after the race. “I wanted to fight until the very finish today, but Livo was a lot stronger. However, there are still races in which I can fight for gold.”

“I’m really satisfied," Klaebo said. "For me, the third place today was as good as a gold medal. It’s my first podium in a distance race in a championship, so doing it in an individual race as well, it’s really special. Really an amazing feeling.”

Both Bolshunov and Klaebo have won gold medals in Beijing — Bolshunov in the skiathlon and Klaebo in the sprint.

Niskanen had a 28.8-second lead over Bolshunov at the 10.5-kilometer mark and was 52.5 seconds faster than Klaebo at that point in the race, and he held it to the finish.

Niskanen and Bolshunov had led the classic ski portion of the skiathlon, the opening cross-country race of the Beijing Olympics, but Bolshunov and Denis Spitzov skied away from Niskanen when the race switched to freestyle skiing. Spitzov took the silver and Niskanen bronze.

Bolshunov won four medals at the 2018 Pyeongchang Games but the skiathlon was his first Olympic gold.

Dario Cologna of Switzerland was aiming for his fourth consecutive Olympic title in the men’s 15km classic race but finished 44th, 3:45.1 behind Niskanen.

This year’s Olympic 15-kilometer (9.3-mile) cross-country race was in the classic ski style and covered two laps of the 7.5-kilometer course. The race alternates between classic and freestyle every Olympic cycle.

Cologna won the 15km freestyle race in Pyeongchang. Simen Hegstad Krueger, who won silver, is not in China due to COVID-19. Russian skier Denis Spitsov, who won silver in the Beijing skialthon, won bronze in the Pyeongchang 15km.

Cologna also was the 15km classic ski champion in Sochi in 2014. Johan Olsson and Daniel Rickardsson of Sweden won silver and bronze. Cologna also won in 2010.