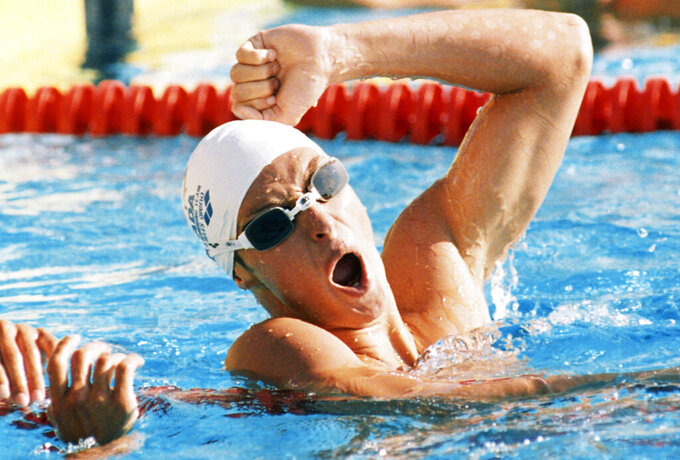 FILE - In this July 30, 1984, file photo Alex Baumann of Canada celebrates after winning the 400 Meter Individual Medley Swimming event, setting a new World Record time of 4:17.41 at the Summer Olympic Games in Los Angeles. Two-time Canadian Olympic gold medalist Baumann has been named chief executive of Swimming Australia, moving up from his current position as chief strategist at the sport's governing body Down Under. (AP Photo/Pete Leabo, File)

GOLD COAST, Australia (AP) — Two-time Canadian Olympic gold medalist Alex Baumann has been named chief executive of Swimming Australia, moving up from his current position as chief strategist at the sport’s governing body Down Under.

Baumann, who won gold medals in the 200- and 400-meter individual medley for Canada at the 1984 Los Angeles Games, replaces Leigh Russell after she vacated the role in November. The 56-year-old Baumann will begin his new duties in May.

Swimming Australia president Kieren Perkins, a 1,500-meter gold medalist at the 1992 and 1996 Olympics, said Baumann’s strong record in leadership roles at other organizations, including Sport New Zealand, played a major role in his appointment.

“He is highly regarded, not just within Swimming Australia, but with all our member organizations and impressed us with his vision for our sport,” Perkins said. “His current role means he already has an important strategic influence on the organization and we are very excited to see him transition into the CEO role.”

The announcement was made during the Australian national swim titles at the Gold Coast south of Brisbane.