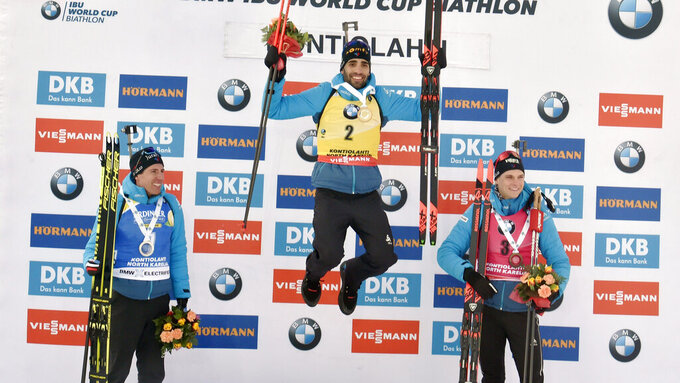 KONTIOLAHTI, Finland (AP) — Martin Fourcade finished his career as one of the greatest biathletes by winning his last race on Saturday on the 10th anniversary of his first pursuit win — in the same place.

France's most successful Winter Olympian with five gold medals announced his retirement on Saturday then won his final race in Kontiolahti, Finland, narrowly missing out on an eighth World Cup sprint title.

“I am proud that I achieved all that I did and proud that I discovered myself along the journey,” he said. “Today is just a beautiful way to finish it.”

Two years ago, Fourcade won the sprint title for the seventh straight year.

At the Winter Olympics he won three golds at Pyeongchang in 2018 — pursuit, mass start and mixed relay — and two at the 2014 Sochi Games in pursuit and individual.

He won 13 gold medals at world championships, including 11 individual golds.

The 31-year-old Fourcade also was outspoken against doping. At the 2017 worlds, he walked out of a post-race podium ceremony following a dispute with Alexander Loginov, a Russian who had recently returned from a doping ban.

“I realized my dreams and experienced the greatest emotions. I fought and I won,” Fourcade wrote earlier Saturday in a moving letter to his fans. “I suffered, too. I fell and I got back up. But above all, I grew.”

He feels proud to have helped to improve biathlon's popularity in France.

“Record TV audiences show the popular success of the World Cups held at Grand Bornand, in France, and elsewhere I experienced a wonderful ascension,” he said. “That of the sport I love, to which I dedicated a large part of my life, and which gave me much in return.”

Fourcade considered retiring after the 2018 Games but “still had this initial” will to compete.

“As I say goodbye to you all, I feel emotional but at peace. I remember the places, the faces, the emotions that punctuated my career," he wrote. "I'm leaving a part of my life behind me.”