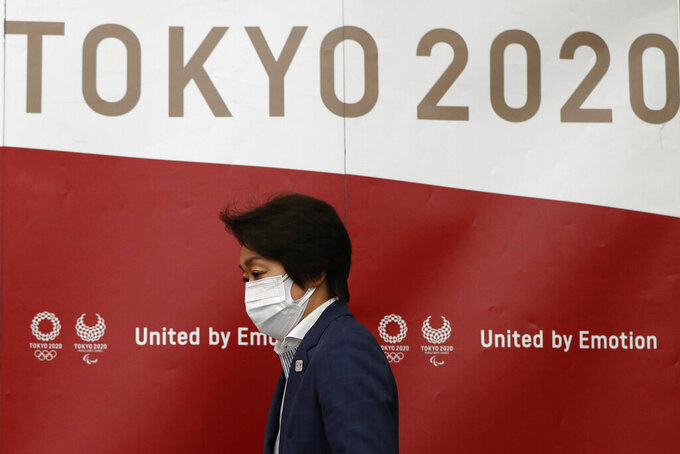 Tokyo 2020 Olympics Organizing Committee President Seiko Hashimoto arrives at a news conference after a meeting with local municipalities working group hosted by the government in Tokyo Wednesday, June 23, 2021, on the day to mark one month to go until the opening of the Olympic Games. (Issei Kato/Pool Photo via AP)

The admission by Seiko Hashimoto comes only four days after she announced on Monday that up to 10,000 local fans would be allowed into venues — with numbers not to exceed 50% of venue capacity regardless of indoor or outdoor events.

Organizers put off the decision on local fans for several months, and fans from abroad were banned months ago. The move to allow fans went against many medical experts who have said the safest Olympics would be with no fans due to coronavirus.

“What I feel is that no spectating should remain an option for us as we look into things,” Hashimoto said at a news conference. “The situation is changing from time to time so that is why we need to remain flexible and prompt in responding to any change. A no-spectator games is one of our options.”

Organizers seemed to back down slightly on fans after a COVID-19 panel for the Tokyo Metropolitan Government reported on Thursday that "there's a sign of resurgence” of infections in Tokyo.

The panel said infections grew by 11% in the last week — based on the seven-day average — with more of the contagious Delta variant cases being detected. Organizers say they will take another look at fans after the current “quasi-state of emergency" ends on July 11.

Olympic Minister Tamayo Marukawa delivered another wake-up call on Friday when she confirmed that a member of the Ugandan team who tested positive for the coronavirus upon entry to Japan last week was infected with the Delta variant.

Despite extensive testing before and upon entry, cases like these seem certain to happen with 11,000 Olympic athletes and 4,400 Paralympic athletes entering Tokyo, along with tens of thousands of added staff, coaches, judges, and IOC and sports federations officials.

The first Ugandan member, reportedly a coach, was detected positive last Saturday at the Narita airport near Tokyo and quarantined. But the Japanese authorities allowed the remainder of the nine-person team to travel more than 500 kilometers (300 miles) on a chartered bus to their pre-game camp in Izumisano, in the western prefecture of Osaka.

“They all carried certificates showing their negative test results,” Izumisano Mayor Hiroyasu Chiyomatsu said. “We never imagined they could be infected.”

The team members were quarantining at a hotel there.

“The Olympic organizing committee is very much interested in finding out more from this (Uganda) example,” Hashimoto said. “We will pay detailed attention to get information as much as possible from this experience," with operations refined accordingly.

The head of Imperial Household Agency on Thursday said Emperor Naruhito is “extremely worried” about the health risks presented by the Olympics. It was a rare move for the ceremonial figure who stays away from politics.

He was under no obligation to speak up about the Olympics, and the fact he did is more significant than what he said.

Hashimoto was asked at least three times about the Emperor's comments, but did not mention his name and gave vague replies.

“We need to remove anxiety and concerns from all the Japanese people," she said. “We need to really ensure a safe and secure operation of the games. So we will need to put in more effort in doing that.”

The IOC is pushing ahead with the Olympics, partly because it derives almost 75% of its income from selling broadcast rights. Estimates suggest $3 billion to $4 billion in broadcast money is on the line in Tokyo.

The official cost of the Olympics is $15.4 billion, though several government audits say it's much larger. All but $6.7 billion is public money. The IOC contributes about $1.5 billion.

Japan has reported about 780,000 coronavirus cases and has attributed about 14,500 deaths to COVID-19. About 9% of Japanese have been fully vaccinated as the government steps up its inoculation drive.