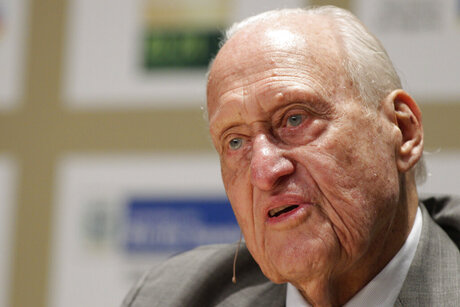 By: MAURICIO SAVARESE (AP), STEPHEN WADE (AP)
RIO DE JANEIROCopyright 2020 The Associated Press. All rights reserved. This material may not be published, broadcast, rewritten or redistributed.
-22.9028-43.2075

Part of the Brazilian's pitch included an invitation for IOC members to join him to celebrate his 100th birthday in Rio on the eve of the games.

The day has arrived.

Havelange turns 100 on Sunday and his spokesman, Sergio Martins, told The Associated Press that the former head of soccer world governing body FIFA plans to attend mass on Monday in his Ipanema neighborhood to celebrate the milestone.

"President Havelange is in good health and, yes, he expects to go to the opening ceremony of the Olympic Games," Martins said.

Martins turned down a request from AP to interview Havelange, who seldom speaks publicly.

Havelange will not be welcome in all Olympic circles in Rio, and is unlikely to be asked to pose for a photo with IOC President Thomas Bach.

Havelange led FIFA for 24 years and turned the leadership over to Sepp Blatter. But he's been embroiled in controversy in recent years — long before the bribery and graft scandal last year that brought down Blatter and saw dozens of top soccer officials indicted on corruption charges.

Havelange resigned from the IOC in 2011, citing unspecified health problems. By stepping down he avoided a possible suspension for taking kickbacks from former FIFA marketing partner ISL.

Havelange's former son-in-law, Ricardo Teixeira — the former head of the Brazilian Football Confederation — was also accused to taking bribes from the marketing company.

Havelange also resigned in 2013 as FIFA's honorary president, a move that kept him out of reach of the federation's ethics committee.

The stadium where track and field will take place during the Olympics is officially named the "Joao Havelange Olympic Stadium." But organizing officials have removed his name for the games, simply calling it "Olympic Stadium."

The city-owned stadium — built for the 2007 Pan American Games — is the home of Botafogo football club, which failed in an attempt with the Rio city government to change the name officially.

Blatter wanted to visit Havelange to celebrate his birthday, but was told by his lawyer not to leave Switzerland for fear or being arrested and extradited to the United States.

However, Blatter sent a message to Havelange on Friday, describing himself as the Brazilian's "little brother" and adding that Havelange had discovered "the secret of eternal youth, not only as an Olympic athlete or FIFA president, but as a philosopher of life."

"I'm sorry, that the circumstances did not allow me to be at your side on this day," Blatter added. "But I will get to see you during this year and as we can celebrate together 180 years, half passed in passion for sport, and football."

Havelange chaired his country's football confederation from 1956 to 1974, and was first elected FIFA president 42 years ago after defeating incumbent president Stanley Rous of England. Havelange based his campaign on giving more prominence to voters outside Europe, adding new World Cup places, and more funding.

Havelange has been in and out of hospitals in recent years due to respiratory problems. He doesn't leave home much, but he can be seen occasionally at a country club in the Ipanema Beach area.

Havelange competed in two Olympics — as a swimmer in Berlin in 1936, and as a water polo player in 1952 in Helsinki.