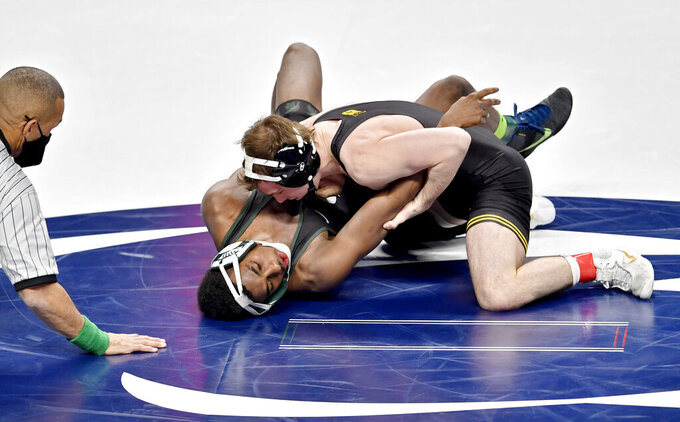 It has been more than a decade since Iowa, the program that Dan Gable turned into the gold standard in college wrestling, showed the kind of dominance at the NCAA championships that it takes to win a team title.

The drought probably would have ended last season had the tournament not been canceled.

It almost certainly will end this weekend.

Beginning with 125-pound Spencer Lee, the two-time and defending champ, right on through heavyweight, the Hawkeyes will bring the deepest and most talented team in the field to St. Louis. They qualified an All-American candidate at every weight and will have four No. 1 seeds when the tournament begins with the first session Thursday.

“The bottom line is do your job,” Hawkeyes coach Tom Brands said. “We want to be our strongest at the end of the year and wherever you are in the bracket, the No. 1 seed or anywhere else you're placed, go do your job. Do it at a high level.”

The Hawkeyes have done that better than just about any other program in history.

Brands, a three-time NCAA champion for Iowa and an Olympic gold medalist, almost immediately brought back the winning ways, with three straight team titles beginning in 2008. But nationals have belonged to Penn State for the past decade, with the Hawkeyes finishing in the top two just once — until this year.

The Hawkeyes won the Big Ten Tournament in dominant fashion. And now they have their sights set on nationals.

“Every year it gets better: compete harder, train smarter,” Lee said, “and I promised (Iowa president) Bruce Harreld that I would bring him a national title before I graduated. He hasn't retired yet. I plan on doing just that.”

Penn State has won four straight and eight of the last nine team titles, and the Nittany Lions have a young team capable of springing some upsets. Roman Bravo-Young at 133 pounds, Nick Lee at 141 and Aaron Brooks at 184 are title contenders.

“I don't think you ever should be too surprised by results” Penn State coach Cael Sanderson said. “The way we practice we put these guys in tough situations. We know their strengths and weaknesses. We came out of the Big Tens disappointed, but when you step back and look, our team probably wrestled above where we were supposed to in the majority of weights. We have this believe and expectation that we're going to have awesome performances all the time.”

Most of the biggest names headed to St. Louis will turn right around and head to the Olympic trials, which begin April 2 in Fort Worth, Texas. Brooks will be one of them along with 133-pound Daton Fix, the undefeated Big 12 champ from Oklahoma State, and Ryan Deaking, the 157-pound favorite from Northwestern.

In fact, there's a good chance Fix and Lee could meet at trails, though they will be at different weights in St. Louis.

“It will be important to take a little break, relax my body, get my mind on track,” Brooks said, “and not overdoing it because (trials) are around the corner. You get a lot of matches this week against the best in the country, so you can't overdo it.”

WELCOME TO THE PARTY

Paul Bianchi qualified for the NCAA Tournament with North Dakota State in 2018. Three years later, Bianchi is back as an at-large pick for Little Rock — the first time the Trojans have qualified a wrester for nationals. He is the No. 29 seed at 133 pounds and will face fourth-seeded Austin DeSanto of Iowa in the first round.

Michigan finished fourth in the Big Ten and has a national title favorite in Myles Amine at 197 pounds, while Michigan State qualified eight for nationals, the most for the Spartans since 2000. Central Michigan also has a pair of All-American hopes in fourth-seeded Drew Hildebrandt at 125 pounds and third-seeded Matt Stencel at heavyweight.

North Carolina State's Jayden Hidley, who just won his fourth ACC championship, will be the No. 2 seed at 157 pounds. His brother, Trent Hidlay, is the No. 2 seed for the Wolfpack at 184. They're the first set of brothers to have top-two seeds at nationals since Logan and Hunter Stiebers in 2003 earned No. 1 seeds.