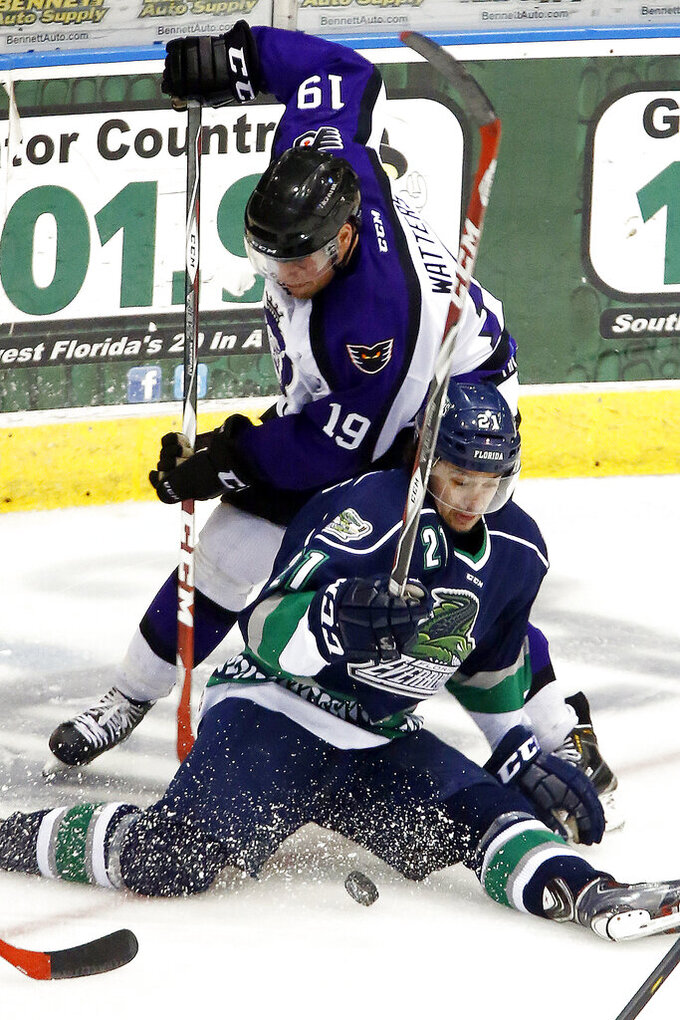 Tim Harrison made the long drive from South Carolina to his home just south of Boston with a lot on his mind.

The ECHL season had just been canceled because of the coronavirus pandemic, and the 26-year-old wondered if he’d need to dig for oysters on the beach or do odd jobs around the neighborhood to make ends meet. He and many fellow minor hockey league players are struggling and don’t know how they will afford to get to next season.

“I'm obviously going to try my best to do what I can to whip up some money, but it might take a couple weeks before I can even do that,” Harrison said. “Just not knowing what's going to happen and how I'm going to survive the next couple months is probably the biggest worry.”

The 26-team ECHL — a developmental pro league just below the American Hockey League — canceled its season in mid-March, three weeks before the playoffs. The final paychecks came March 16, a significant blow to more than 400 players on ECHL-only contracts who make an average of $700-725 per week, less than $3,000 per month.

Players on NHL deals continue to be paid while the season is suspended, but ECHL teams couldn’t afford to follow the same path. Hockey players in the minors face an uncertain future and even offseason jobs could be hard to come by.

“I kind of figured that I'd be able to just get maybe a labor or summer job at the end of the season,” said 29-year-old forward James Henry, a veteran of seven ECHL seasons. "With how everything's going and everything being closed, that seems like a more difficult job to obtain right now."

Harrison and South Carolina Stingrays teammate Tom Parisi thought they’d be preparing for a playoff run that would have meant bonus checks deep into the spring. Instead, Parisi — who left hockey briefly to take a finance job — is considering hanging up his skates for good.

“Honestly, I think everything's on the table,” Parisi said.

He’s not alone. Blake Kessel, brother of Arizona Coyotes winger Phil Kessel and Olympic gold-medal-winning forward Amanda Kessel, has bounced around to five different leagues and wondered if this season would be his last at age 30.

“As you get a little older, if you're still in the (ECHL) obviously you're not making a ton of money,” Kessel said. “Some guys might have to just retire and take a more stable job, if they can find it."

“The creation of this fund is one of the next steps in coming together to help our players that are in the most need at this time," ECHL Commissioner Ryan Crelin said.

Landon knows the fund won't be able to give players 100% of what they would have earned, but hopes members look into the career-enhancement program for ideas on life beyond the sport.

Riley Weselowski, a 35-year-old defenseman for Wichita, counts himself fortunate that his wife has a full-time job in the medical field and the couple has enough savings to last a couple of months. Many players make money over the summer by running or helping out at hockey camps, but those are in doubt during the pandemic.

“If this really drags on and we start looking into June, July, we're going to be hurt obviously a lot worse,” Weselowski said. “If it ever did come to that and it drags out that long, I think we'll have much bigger problems than just worrying about that and obviously the country being in a pretty bad spot if it does drag out that long.”

ECHL players are quick to say there are others around the world with bigger problems. They are grateful to have health care paid for through June 30. And there are efforts underway to help.

“A lot of us have been talking and trying to continue to find ways to help them out,” 32-year-old AHL forward Brett Sutter said. “Guys there have families, and there's how they make a living chasing their dreams.”

Landon said some players are literally hurting because they can't get an elective surgery, such as repairing a torn labrum. He is also concerned about what the ECHL might look like when it returns, a sentiment a league spokesman did not immediately respond to a request for comment on.

“I think we had some teams on the edge of the cliff," Landon said “It's important for us to keep that in place for the players and the teams that actually endure this pandemic, and hopefully we salvage as many teams as possible for next year where the guys need to work.”