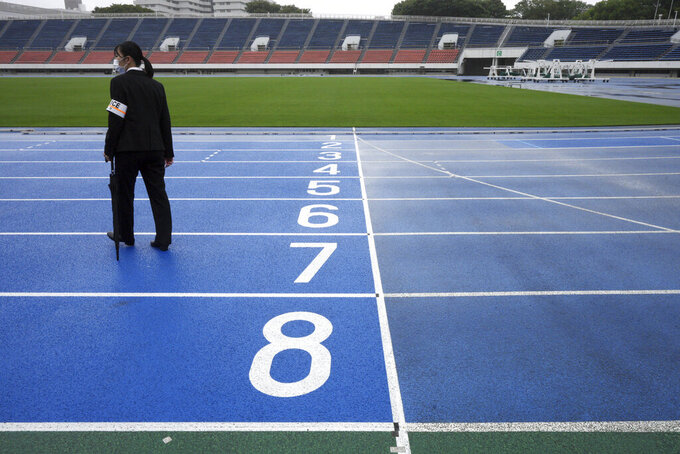 A police officer stands at empty race track after the unveiling ceremony for Olympic Flame of the Tokyo 2020 Olympic torch relay at Komazawa Olympic Park, which was initially built for the 1964 Tokyo Olympic Games, Friday, July 9, 2021, in Tokyo. (AP Photo/Eugene Hoshiko)

TOKYO (AP) — Japan is famous for running on consensus. But the decision to proceed with the pandemic-postponed Tokyo Olympics has shredded it.

On one side, the Japanese public face concerns about the coronavirus at a time when only 16% are fully vaccinated. On the other side are politicians who hope to save face by holding the Games and the International Olympic Committee with billions of dollars on the line.

“We have been cornered into a situation where we cannot even stop now. We are damned if we do, and damned if we do not,” Kaori Yamaguchi, a member of the Japanese Olympic Committee and a bronze medalist in judo in 1988, wrote in a recent editorial published by the Kyodo news agency. “The IOC also seems to think that public opinion in Japan is not important.”

Support for going ahead seems to be split, and there's persistent opposition. Much of that concern stems from qualms about the health risks. Even though the government is now supercharging its vaccine drive after a slow start, the vast majority of the population still won’t be immunized when the Games start in two weeks.

That’s left the IOC and the Japanese government going through contortions to pull this off. Dr. Shigeru Omi, the government’s top COVID-19 adviser, called it “abnormal” to hold the world’s biggest sports event during a pandemic.

The official cost of the Tokyo Olympics is $15.4 billion, but government audits suggest it’s twice that. All but $6.7 billion is public money. The IOC chips in only about $1.5 billion to the overall cost, and some are in-kind contributions that do not involve cash.

The pressure to hold the Olympics is largely financial for the Switzerland-based IOC, a nonprofit but highly commercial body that earns 91% of its income from broadcast rights and sponsorship. Estimates suggest a cancelation could cost it $3 billion to $4 billion in broadcast rights income.

Beyond financial concerns, putting on a successful Olympics is also a major source of pride for the host country. Some economists compare it to throwing a big party. You overspend but hope your guests go away bragging about the hospitality.

“It’s a bit like a gambler who already has lost too much,” said Koichi Nakano, a political scientist at Sophia University in Tokyo. “Pulling out of it now will only confirm the huge losses made, but carrying on you can still cling to the hope of winning big and taking it all back.”

Before the postponement 15 months ago, Japan was on track to host a well-run if expensive Olympics. It had a beautiful new National Stadium by architect Kengo Kuma, meticulous organization, and a grand stage for a country that mounted historic Summer Games in 1964 — just 19 years after defeat in World War II. IOC President Thomas Bach called Tokyo the “best prepared Olympics ever” — and he still says it repeatedly.

But now, worries that the games will be become an incubator for the virus hang over them, with additional concerns about variant strains getting a foothold.

While the Games may still end up wowing television audiences who will tune in around the world, the pandemic has removed any sense of celebration. Athletes are meant to stay in the village or venues. Most others entering Japan for the Olympics can only shuttle between their hotels and venues for the first 14 days, must sign a pledge to follow the rules, and could have their movements monitored by GPS.

And the kicker announced this week by organizers: Local fans will be banned from all venues in Tokyo and three neighboring prefectures — making it a TV-only Olympics. A few venues like baseball and softball at Fukushima in northeastern Japan will allow a limited number of fans.

There will be no public viewing areas in Tokyo and the torch relay has been pulled from the streets of the capital.

With spectators from overseas ruled out months ago, there’s little business for hotels. Local sponsors have paid more than $3 billion to be involved, and some have complained about lost advertising possibilities. Others have expressed concern about being tied to an event that’s unpopular at home.

When fans were still in the planning to attend venues, organizers initially said they were looking into selling alcohol. But after immediate pushback, organizing committee president Seiko Hashimoto reversed the decision.

And athletes who might want a drink to celebrate have been told by organizers to “drink alone” in their rooms.

Alcohol is otherwise banned in the athletes’ village.

This village will also have a fever clinic, the first stop for anyone who fails a daily test — and the last place anyone wants to go.

“We are hoping that there won’t be so many people,” Dr. Tetsuya Miyamoto said, director of medical services for Tokyo 2020. “This is an infectious disease we are talking about. It has the possibility of spreading. So once that happens, the numbers could start to explode.”

Details of the opening ceremony are always kept a secret. But this time the questions aren’t about which celebrity will light the cauldron but rather will athletes social distance and wear masks as they march through the venue? And how many will march at all? And will any fans be allowed, or only VIPs?

One of the symbols of the celebratory atmosphere of the Olympics has long been its notorious policy of handing out condoms. At the games in Rio de Janeiro, officials distributed 450,000 through vending machines with signs that read, “Celebrate with a Condom.”

This time there will be 150,000 — but only given to athletes as they leave for home.