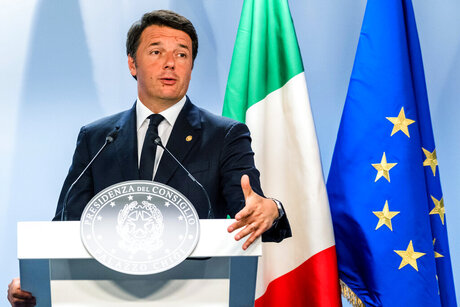 RIO DE JANEIRO (AP) — Holding the Olympics in Rome in 2024 would send a message of defiance to terrorists trying to cower people into a "life of fear" and rob them of their sporting and cultural identity, Italian Premier Matteo Renzi said Friday.

Renzi came to Brazil to attend the opening of the Rio de Janeiro Games and promote Rome's bid for the 2024 Olympics.

Citing the recent deadly attacks by extremists in European cities, Renzi said the Olympics in Rome would answer those using violence to achieve their political aims.

"This is a crucial moment," Renzi said in an interview with two international news agencies, including The Associated Press. "Terrorist attacks on the world, particularly in Europe, are focused to destroy the life of the people. If they don't achieve the result of killing the people, the second best goal for these crazy men, women, terrorists (is to) give us a life of fear, force us into the homes without possibility to live."

Renzi said the Olympics would reject the "fundamentalists (who) forbid soccer, music, sport."

Rome is competing against Paris, Los Angeles and Budapest, Hungary. All four cities have leaders in Rio to observe the games and pitch their bid to Olympic officials. The International Olympic Committee will select the host city in September 2017.

"I think our dossier is the best," Renzi said. "It is better than our friends of Paris and other cities. I don't know if it's correct to say that, but it's my view."

Renzi has thrown his full support behind the bid, only a few years after Rome was forced to drop its candidacy for the 2020 Olympics when the government of Mario Monti refused to provide financial backing for the games during the economic downturn.

The 41-year-old Renzi, a former mayor of Florence who became premier in 2014, said the economy has improved and nearly 600,000 jobs have been created under his administration.

"The situation is better than four years ago, but I think the decision of Mario Monti four years ago was a mistake," he said. "One year ago nobody thought Rome could be in the best position for a candidature. One year ago, 12 months ago, nobody in Italy believed it possible to create a very good dossier. Now the feeling in Italy about the Olympic Games is totally different."

The latest bid, however, faces opposition from Rome's new mayor, Virginia Raggi. The capital's first female mayor has repeatedly said the city has bigger social and economic priorities to deal with at the moment. Without the city's support, it's difficult to see the bid going the distance. It's uncertain whether Raggi will push for a referendum.

"I think the new mayor has just arrived," Renzi said. "We respect the decision the new government will bring in the next few weeks. We are ready to work with the new mayor, not only for the Olympic Games. We are not worried."

"If you think back four years ago, nobody could imagine an under-40 becoming prime minister of Italy or a woman under 40 becoming mayor of Rome," he said. "This is a new page in the political history of Italy."

Italian Olympic Committee president Giovanni Malago said he spoke with the Raggi's office before coming to Rio and both sides agreed to meet again after the games to discuss the bid.

The bid race comes during a turbulent political period, with the U.S. presidential election in November and French elections next year.

Asked whether a victory for Donald Trump would hurt Los Angeles' bid chances with IOC members from the rest of the world, Renzi didn't hide his own political preference for Hillary Clinton.

"I respect every vote of our American friends," he said. "I will host the G7 in Taormina, Sicily, in May 2017. Obviously as a democrat I hope I can host the new president — whoever she'll be."