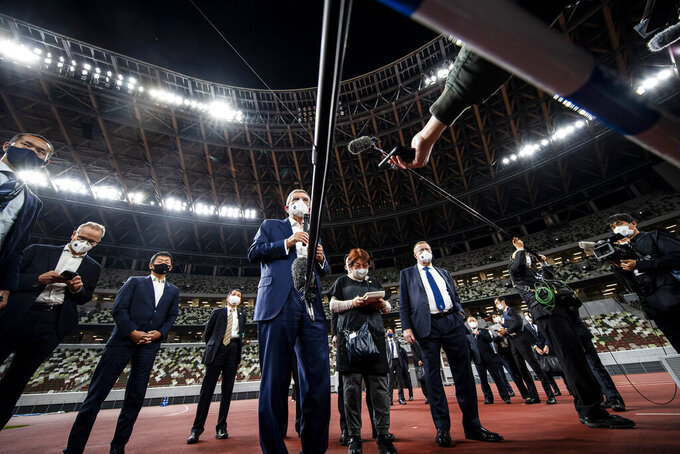 IOC President Thomas Bach wearing a face mask speaks to the media at the National Stadium, the main venue for the 2020 Olympic and Paralympic Games postponed until July 2021 due to the coronavirus pandemic, in Tokyo Tuesday, Nov. 17, 2020. Bach said during this week's trip to Tokyo that he is “encouraging” all Olympic “participants” and fans to be vaccinated - if one becomes available - if they are going to attend next year's Tokyo Olympics. (Behrouz Mehri/Pool Photo via AP)

Vincenzo Spadafora, the minister, said he wrote in a letter to the International Olympic Committee on Tuesday that a forthcoming government reform “guarantees CONI proper functional and organizational autonomy, as dictated by the Olympic Charter.”

Bach had taken issue with the Italian government’s creation of a new organization, ‘Sport e Salute,’ that was created at the start of last year to run the country’s sports finances, which were previously controlled by an arm of the Italian Olympic Committee (CONI).

The IOC president had also suggested that the alleged interference could — under extreme circumstances — result in Italy being stripped of hosting rights for the 2026 Winter Olympics in Milan and Cortina d’Ampezzo.

“The framework recognizes that CONI, with extreme clarity and as perhaps isn’t the case in many other countries, has all the functions it is due according to Article 27 of the Olympic Charter,” read a portion of Spadafora’s letter to Bach.

Still, CONI president Giovanni Malagò said earlier Tuesday that “it doesn’t seem that the problems have been solved.”

While CONI said it has no problem with the funding issue, it has taken exception to Spadafora's meddling with its election procedures.

Malagò is planning to run for CONI president again next year, but the proposed law could preclude him from serving three consecutive terms.

The reforms must be passed by the end of the month to become law.

“We’ll see what happens over the next few days,” said Malagò, who is an IOC member. “The IOC is waiting, too.”