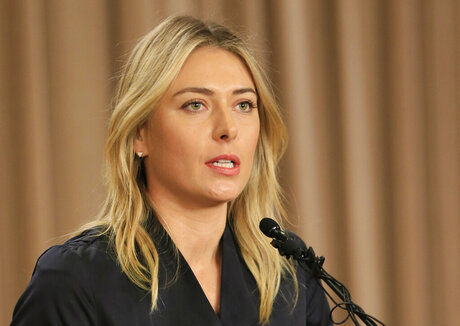 LAUSANNE, Switzerland (AP) — A disciplinary hearing has been scheduled in Maria Sharapova's doping case, with a ruling possible before Wimbledon starts.

Haggerty said he has not been told details by the federation's anti-doping tribunal, including when and where the hearing will be held.

Sharapova was provisionally suspended after announcing on March 8 that she tested positive for meldonium at the Australian Open in January.

The Russian said she had been prescribed the blood-flow boosting drug since 2006, and had been unaware the World Anti-Doping Agency had prohibited its use from Jan. 1.

Sharapova will not have her provisional ban lifted pending the verdict, despite WADA publishing new guidelines to sports bodies last week amid uncertainty over how long meldonium remains in an athlete's body.

Some athletes among nearly 200 who have tested positive claim they had not taken the drug this year.

Haggerty said Sharapova's case "will continue to he heard."

"For her, given her levels (of meldonium), it is not even a question," incoming WADA director general Olivier Niggli told The Associated Press this week.

Elected as ITF president last year, Haggerty said the governing body and its integrity unit will be more transparent in communicating about cases.

On Tuesday, the ITF announced a 10-year ban for a Croatian umpire who continued to work, including at the 2015 U.S. Open, while he was serving a one-year suspension which was never publicly disclosed.

"We don't always get things 100 percent but you learn through this," Haggerty said in a briefing on the sidelines of the SportAccord conference.

Haggerty is due in Rio on May 4 to assess Olympic preparations which are "in progress, but not finished," including court surfaces and lighting at the Olympic Park venue.

"If you have a night session and you don't have lights, you have a problem," the American official said. "They are being installed."

This story has been corrected to delete a previous reference to the Tennis Integrity Unit.