It's a keeper: Caeleb Dressel wins Olympic gold on his own 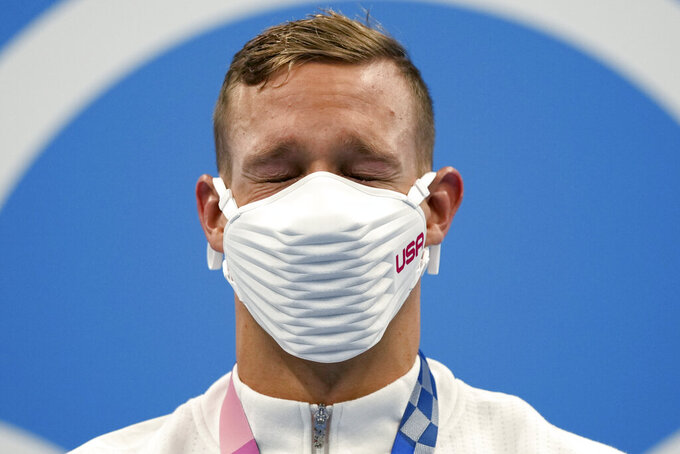 Caeleb Dressel of the United States closes his eyes on the podium after receiving his gold medal for the men's 100-meter freestyle at the 2020 Summer Olympics, Thursday, July 29, 2021, in Tokyo, Japan. (AP Photo/Matthias Schrader)

TOKYO (AP) — Caeleb Dressel tossed his gold medal from a winning relay at the Tokyo Olympics to a teammate in the stands.

He’s keeping his second one.

Dressel edged defending champion Kyle Chalmers of Australia in a thrilling finish to win the 100-meter freestyle on Thursday and earn his first individual Olympic gold.

“I’m starting to find my groove a little bit,” he said. “It’s about time, to be honest."

He returned in the evening to set an Olympic record in the 100 butterfly heats with a time of 50.39 seconds.

After leading off the victorious 4x100 free relay on Day 2, Dressel watched as his U.S. teammates made repeated trips to the podium.

In all, Dressel could leave Tokyo with six medals, which would be two short of Michael Phelps' historic eight golds in 2008. He's been advertised as one of the faces of the Summer Games and a focus of media coverage when he'd rather “just shut up and swim,” as he put it before the Olympics.

“Pressure is fine,” he said. “It's when you turn it into stress is when it becomes a problem."

Dressel is always quick to look for the negative in his performances, and he found it in the heats of the 100 free.

“My first swims were rocky,” he said. “I was turning the pressure into stress.”

Minutes before the 100 free final, in the ready room off the deck of the Tokyo Aquatics Centre, Dressel stared at the Olympic rings on the wall. He's at his second Summer Games and first since Phelps retired five years ago, leaving a void that Dressel quickly filled as the world's dominant male swimmer.

All that was missing was an individual Olympic gold medal.

He went out and got it in the 100 free. His winning time of 47.02 seconds — fourth-fastest ever — was a mere six-hundredths ahead of Chalmers, who took silver.

Dressel sat on the lane rope, signaled No. 1 with both index fingers, his eyes scanning the nearly empty 15,000-seat arena, his teammates cheering the loudest in the stands.

“I just really wanted to take hold of that moment and enjoy it,” he said. “I don't want to just surpass any moment because I’m used to it. I don't want to get immune to the feeling that racing offers me.”

On the podium, Dressel wore a bandanna belonging to his late high school mentor around his left wrist. It’s the last remnant he has of math teacher Claire McCool, who died in December 2017. He tied the same bandanna onto the ribbon of the medals he won at the 2019 world meet.

Dressel got to talk for the first time with his wife, Meghan, and his parents watching back in Florida during a post-race TV interview. Other than exchanging occasional texts with them, Dressel has gone dark on social media and is keeping mostly to himself during the nine days of competition.

“I'm kind of a loner, a little bit of a weirdo," he said. “I cry a lot, I'm an emotional person. I can't be calling them every night exerting that energy. It's got to be put into swimming.”