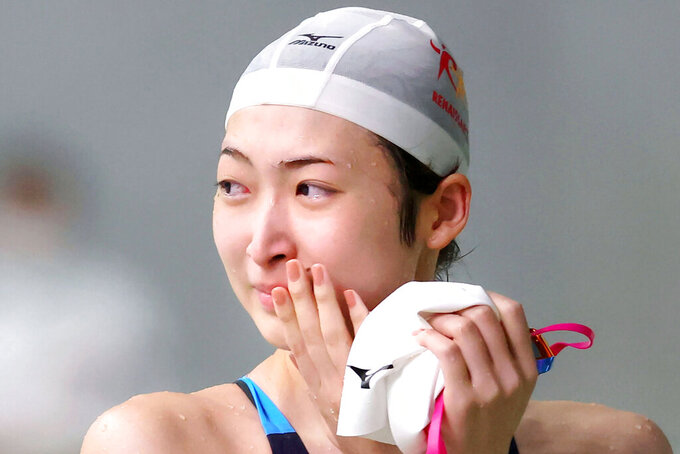 Japanese swim star Rikako Ikee reacts after a women’s 50-meter freestyle at a local race meet, Saturday, Aug. 29, 2020, at Tokyo Tatsumi International Swimming Center in Tokyo. Ikee, who revealed in February last year she had leukemia, returned to competitive swimming on Saturday. The meet was organized by the Tokyo Swimming Association to give athletes a chance to compete following the cancellation of so many other meets this year due to the coronavirus pandemic.(Kyodo News via AP) 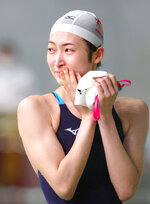 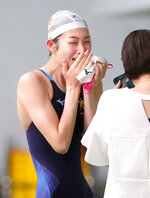 TOKYO (AP) — Olympic hopeful Rikako Ikee returned to competitive swimming on Saturday after undergoing treatment for leukemia for more than a year.

The 20-year-old from Japan would have been among the favorites in several races if she had not fallen ill and the Tokyo Olympics had taken place on schedule last month.

Ikee's best event is probably the 100-meter butterfly, in which she was nearing the world record until she last swam in early 2019.

She marked her return in a 50-meter freestyle heat in a local meet in Tokyo, clocking 26.32 seconds. Her national record time is 24.21 in the event.

“I feel like I have started the second chapter of my swimming career,” she said, speaking in Japanese.

She said she intends to swim in an intercollegiate meet in October, and has not talked about trying to qualify for the delayed Tokyo Games next year.

“My main goal is to qualify for the Paris Olympics,” she said. “At the moment, it's not like I am trying to record my best time. But I would like to try to get better gradually, to rebuild my physical strength. That is my motivation right now.”

Ikee talked about being “extremely nervous" despite swimming at a familiar pool in east Tokyo.

A month ago she appeared in Tokyo's new National Stadium where the opening ceremony would have been held. She was part of a brief video message to encourage other athletes to be hopeful the Olympics will take place next year despite the COVID-19 pandemic.

Local organizers and the International Olympic Committee say the delayed Games will open on July 23, but have given few details how the massive event might he held during a pandemic.