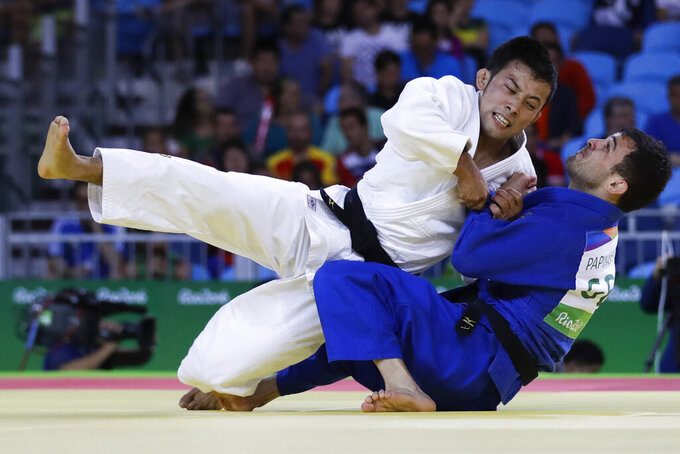 FILE - In this Saturday, Aug. 6, 2016, file photo, Japan's Naohisa Takato, left, competes against Georgia's Amiran Papinashvili during the men's 60-kg judo competition at the 2016 Summer Olympics in Rio de Janeiro, Brazil. “I had enough of the humiliating experience of ending up with a bronze medal in Rio," Takato said. "In the Tokyo Olympics, I’ll definitely seize the gold. With whatever kind of judo, however unrefined that could be, I’ll get a gold medal and play ‘Kimigayo’ (Japan’s national anthem) in the awarding ceremony.” (AP Photo/Markus Schreiber, File)

TOKYO (AP) — The first day of full competition of the Tokyo Games could mark the turning point for an uneasy Japanese public that overwhelmingly disapproved of the Olympics being held during the pandemic.

The first medal of the Games will go to the winner of the women's 10-meter air rifle, with more hardware handed out Saturday in archery's Olympic debut of the mixed team event, the men's cycling road race, fencing and weightlifting. Japan's first opportunity to win gold is in a pair of judo events. Here are some things to watch. (all times Eastern):

This homegrown sport on the opening day of the Olympics might be the event that could give the Japanese public something to celebrate at these Games.

Naohisa Takato (men’s 60 kg) and Funa Tonaki (women’s 48 kg) both can make their nation proud by claiming Japan’s first gold medals of these games. The Japanese media has focused heavily on the opening-day judokas under the assumption strong showings might sway citizens into supporting the Olympic Games.

The Nippon Budokan is a revered arena that has crowned countless martial arts champions since it opened in 1964 with the first Olympic judo tournament. The Budokan will be mostly empty because of pandemic restrictions, but all of Japan will be watching. The medals will be awarded at the end of a session aired during USA Network's all-day coverage.

The International Olympic Committee added several events meant to lure in a younger audience and the first to begin play will be 3-on-3 basketball.

What is it, you ask?

It's essentially a formal pickup game between teams of three players on a court roughly half the size of a traditional court.

It is divided into two areas by a semicircle and baskets scored inside the arc are worth one point; two points from outside the arc. The first team to score 21 points wins, but the game is only 10 minutes and the victory will go to whichever team is ahead at the buzzer.

The United States men's team failed to qualify, but the women's team makes its debut against France at 10:45 a.m. on NBC.

Nine days of swimming action begins at the Tokyo Aquatics Centre with four finals aired during primetime on NBC.

The Americans won 33 medals — 16 gold — in Rio and have topped the medals table at every Olympics since Seoul in 1988. The women’s 4x100 free relay closes Saturday night action with the Americans seeking their first win since 2000.

It should be an Australia vs. the U.S. showdown, and the Aussies have won three out of the past four Olympics.

One of the most popular events of the Olympics begins on Centre Court at Shiokaze Park when the U.S. women's new-look beach volleyball team hits the sand.

Keri Walsh Jennings failed to qualify for her fifth Olympics — she won gold with partner Misty May-Treanor in 2004, 2008 and 2012. Walsh Jennings teamed with April Ross in 2016 to win bronze, but it is Ross' show now.

Ross is now partnered with Alix Klineman and the duo finished tied for first in the FIVB provisional Olympic ranking. Ross and Klineman clinched one of the American's two spots for Tokyo in March by winning a tournament. Ross is just the second American to qualify for the Olympic beach volleyball tournament with three different partners.

The Americans play China at 8 p.m. on NBC.

FOR THE NIGHT OWLS

The event should feature high-flying tricks and stunts, and the competitors range in age from 12 to 47. U.S. skater Nyjah Huston, possibly the best-known skater, will make his Olympic debut in men's street, which will be decided during NBC's late-night coverage.

The U.S. women's volleyball team will begin play against Argentina in the same time slot. The Americans are seeking their first Olympic gold after winning bronze in Rio.

The women are led by Foluke Akinradewo Gunderson, who is back for her third Olympics after giving birth to her first child in November 2019. The late night show begins at midnight.