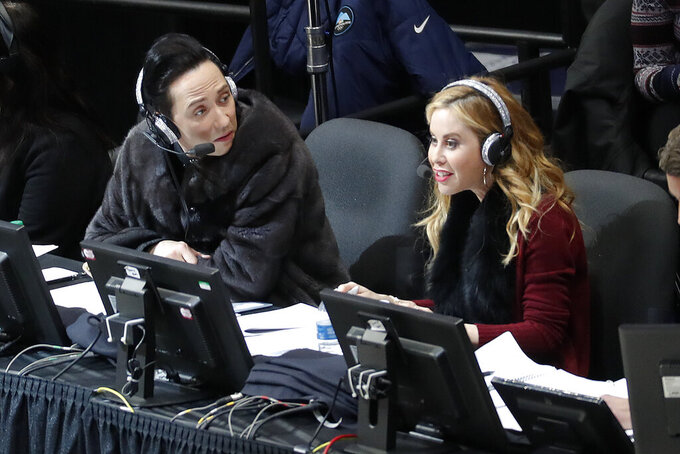 Announcers Johnny Weir and Tara Lipinski talk during the women's free skate program at the U.S. Figure Skating Championships in Detroit. Tara Lipinski, the 1998 Olympic gold medalist and now the top TV analyst in the sport along with NBC partner Johnny Weir, recognizes how jumbled the figure skating scene is. “The pre-Olympic season sets the tone of the Olympic season,” says Lipinski, who will anchor coverage of Skate America this week on NBC, NBCSN and the Peacock streaming service. (AP Photo/Paul Sancya, File)

With the Summer Olympics in Tokyo delayed a year by the coronavirus pandemic, not much attention has been paid to the Winter Games scheduled for February 2022 in Beijing.

Except for by those who participate in the sports that compete on the ice and snow — in particular figure skating, for which the competitive season that begins this week at a watered-down Skate America in Las Vegas is critical.

COVID-19 forced the cancellation of this year's world championships in March. There’s uncertainty if the 2021 event set for March 22-28 in Stockholm will be held, and the pre-Olympics worlds is the most important because it sets the field for the games.

“Personally, I would love to see worlds happen,” says Vincent Chou, the second-ranked men's skater behind two-time world champion Nathan Chen. “Two years in a row with no worlds would be unfortunate. I think worlds would give everyone a taste of the Olympic fire that is to come in 2022 — if it happens, of course. But again, if the circumstances dictate no worlds, then no worlds it is.”

Already, the Grand Prix series has been reduced from six events to four, and the Grand Prix Final, a test event in Beijing for the 2022 Olympics, has been canceled. It's uncertain if the Grand Prix competitions in Russia, China and Japan will happen.

Tara Lipinski, the 1998 Olympic gold medalist and now the top TV analyst in the sport along with NBC partners Johnny Weir and Tanith White, recognizes how jumbled the figure skating scene is.

“A skater trains to peak at a certain time every single year for their most important events; the process is similar in the Olympic quad. There is always a master plan and with the changes to the Grand Prix season and lack of competition opportunity this year, there will be a new set of uncharted challenges and obstacles these skaters will have to overcome.

“But if anyone can quickly adapt in high-pressure situations, it’s an athlete. Although there have been modifications, it’s good the entire season hasn’t been canceled and there are still a few opportunities to compete. With that all being said, it does raise the question of how predictive the pre-Olympic season will be heading into ’22.”

Weir also isn't concerned about the athletes coming through if they have the opportunities to do so. Of course, no one has true control over providing those opportunities, given the current state of the pandemic.

Plus, Skate America will only feature U.S. competitors and those from other nations who train here. The Grand Prix events in Russia, China and France would have similar restrictions: national skaters and those training in that country.

“Certainly, the opportunities to compete against their biggest international rivals are diminished, but I have high hopes for the athletes,” says Weir, a three-time U.S. champion. "When you plan on being an Olympian, you do everything in your power to make that dream a reality, and no matter what the landscape looks like for international events over the next season, I can guarantee that nobody who’s on that Olympic track is slacking.

“The biggest issue will be maintaining their competitive edge without major events to compete in. No matter how many seasons you’ve been a competitor, you can’t simulate the nerves, atmosphere or adrenaline at home. I should hope this dark time for our world will inspire the athletes and all of us cheering them on.”