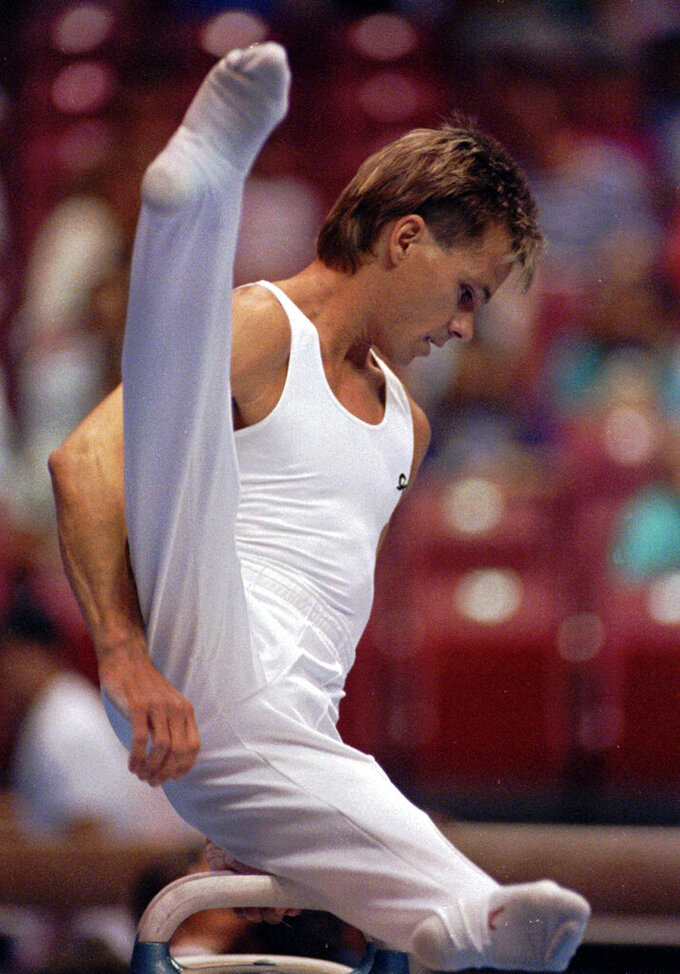 FILE - In this June 6, 1991, file photo, Kurt Thomas, 35, competes on the pommel horse at the U.S. Gymnastics Championships in the compulsory round in Cincinnati. Thomas, the first U.S. male gymnast to win a world championship gold medal, has died. He was 64. Thomas’ family said he died Friday, June 5, 2020. He had a stroke May 24, caused by a tear of the basilar artery in the brain stem. (AP Photo/Michael Snyder, File)

Kurt Thomas, the first U.S. male gymnast to win a world championship gold medal, has died. He was 64.

Thomas’ family said he died Friday. He had a stroke May 24, caused by a tear of the basilar artery in the brain stem.

“Yesterday, I lost my universe, my best friend and my soulmate of 24 years. Kurt lived his life to the extreme, and I will be forever honored to be his wife,” Beckie Thomas told International Gymnast Magazine.

After competing in the 1976 Montreal Olympics, Thomas won the floor exercise in the 1978 world championships in Strasbourg, France, for the first U.S. men’s title. In the 1979 worlds in Fort Worth, Texas, he successfully defended the floor exercise title and won the horizontal bar while adding silver in the all-around, pommel horse and parallel bars.

Thomas. who also captured the American Cup three times, lost a chance for Olympic gold when the United States boycotted the 1980 Moscow Games.

“In my mind and my heart, I knew I was the best at that time,” Thomas told the South Florida Sun-Sentinel in 1989.

Thomas brought a mixture of athleticism and showmanship the elite U.S. men’s program lacked. He starred at Indiana State and led the Sycamores to an NCAA team title in 1977. His popularity on campus at the time ranked second only to future basketball Hall of Famer Larry Bird. Thomas won the AAU’s 1979 James E. Sullivan Award as the nation’s top amateur and was inducted into the International Gymnastics Hall of Fame in 2003.

“Kurt was a fierce rival, who went on to become a cherished friend," two-time Olympic gold medalist Bart Conner posted on Twitter. “Proud to have been your teammate. Sending hugs to his wife Beckie, his children, Hunter, Kassidy and Kurt as well as the entire gymnastics community, who lost a true pioneer today.”

Thomas stepped away competition after 1980 and starred in the 1985 movie “Gymkata” and worked as a television commentator. He attempted a comeback in 1989, pointing toward the 1992 Olympics. He made it all the way to the Olympic Trials at age 36 but fell short of earning one of the six Olympic spots. He poured his life into coaching after retirement. He and Beckie owned and ran Kurt Thomas Gymnastics in Frisco, Texas.

American men had struggled to break through internationally before Thomas' arrival. He was an innovator on pommel horse — where the “Thomas Flair” was entered into the Code of Points — and the floor exercise, where his “Thomas Salto” dismount was considered so dangerous it was eventually banned from competition.

Thomas, who appeared regularly on late night talk shows in the 1970s, was the first breakthrough American male star in a sport where the spotlight gravitates heavily toward women.

“All of us in the gymnastics family are sadden, shocked and devastated by the passing of our own,” Nadia Comaneci tweeted. “Love to the family.”