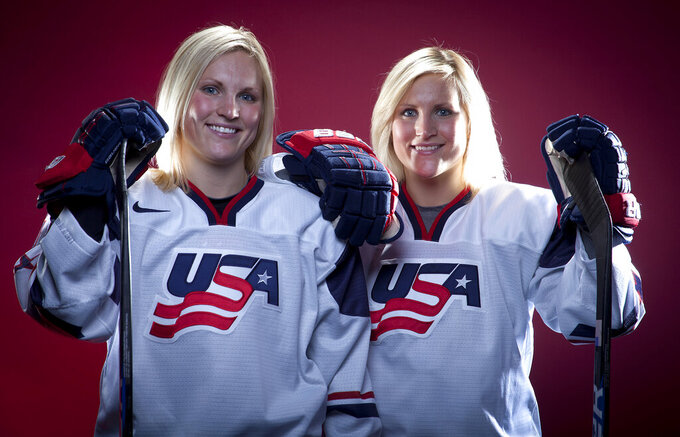 Though they didn’t know it at the time three years ago, USA Hockey’s Lamoureux twin sisters played a major role in perfectly scripting their retirement on Tuesday.

Had it not been for their clutch contributions in the United States’ 3-2 shootout victory over Canada in the gold-medal game at the 2018 Pyeongchang Olympics, Jocelyne Lamoureux-Davidson and Monique Lamoureux-Morando might have been back on the ice practicing rather than announcing an end to their illustrious 14-year international careers.

“My husband asked me that question two weeks ago,” Lamoureux-Davidson said, as to whether the decision to retire would have been harder had the U.S. lost.

“My initial reaction was, ‘Yeah, we would be able to.’ And then I really thought about it, and I think it would’ve been much more difficult,” she added. “We’ve been chasing a dream for so long, so had we not won, who knows.”

The question became moot thanks in large part to the Lamoureux sisters, who leave the sport on a high note.

Lamoureux-Morando scored the tying goal with less than seven minutes remaining, and Lamoureux-Davidson scored the decisive shootout goal, leading the U.S. to its second Olympic title and first since the 1998 Nagano Games.

“We didn’t know that was going to be our last international tournament, and to cap it off with an Olympic gold medal. But I think it’s almost fitting,” Lamoureux-Morando said. “It’s definitely not an easy decision to come to, but one that’s right for us and at the right time.”

They were members of U.S. teams that won six world championships and Olympic silver at the 2010 Vancouver and ’14 Sochi Games.

Both took time off after the 2018 Winter Games to give birth to sons, before returning to represent the U.S. in a series of exhibition games against Canada through last year.

Their decision to retire comes a year before the 2022 Beijing Games are scheduled to open. The 31-year-old identical twins from Grand Forks, North Dakota, are placing an emphasis on off-the-ice priorities.

There’s family, with Lamoureux-Morando announcing she is expecting the birth of her second child next month.

And then there’s business. Aside from establishing a charitable foundation to help disadvantaged youth, the sisters are set to promote their new book, “Dare To Make History,” which is due out in two weeks.

Lamoureux-Davidson is also busy turning her attention to improving women’s hockey for the next generation of players. She’s a board member of the Professional Women’s Hockey Players’ Association, which was formed two years ago with the objective of establishing an economically sustainable women’s professional league in North America.

Lamoureux-Davidson’s job with the PWHPA is an extension of the role she played in helping spearhead a players’ revolt in 2017 that led to USA Hockey to increasing its pay and benefits package — including maternity leave — for women’s national team members.

The two made their USA Hockey debuts as 17-year-olds at the 2006 Four Nations Cup before splitting their college careers with a season at Minnesota and their final three at North Dakota.

“I’m proud of both of your tremendous impact in the 2018 Olympics,” Angela Ruggiero, a former teammate and member of the '98 U.S. team, told the twins on a video conference call Tuesday. “You’ve left your mark on the program through those games alone, but what you’ve done off the ice, too, with your advocacy for equal play and more opportunities for girls and women.”

Katie Million, director of USA Hockey’s women’s national team programs, compared the impact on the sport of the 2018 gold-medal win to that of the team that won at Nagano.

“You will also go down in the history books as pioneers to that next generation of female hockey players,” Million said on the call.

The twins announced their retirement in an article published on The Players’ Tribune.

“When we both started to think about retirement, I’d think about all the goals we had set out to accomplish throughout our careers. We have crossed off most of those. And the ones we came up short on? We learned from those experiences and did our best along the way,” Lamoureux-Davidson wrote.

“I can look at myself in the mirror and be proud. Proud of myself, my sister, and the teams I was a part of,” she added. “Even though our playing days have come to a close, I know our roles as leaders in the game of hockey aren’t coming to an end any time soon.”