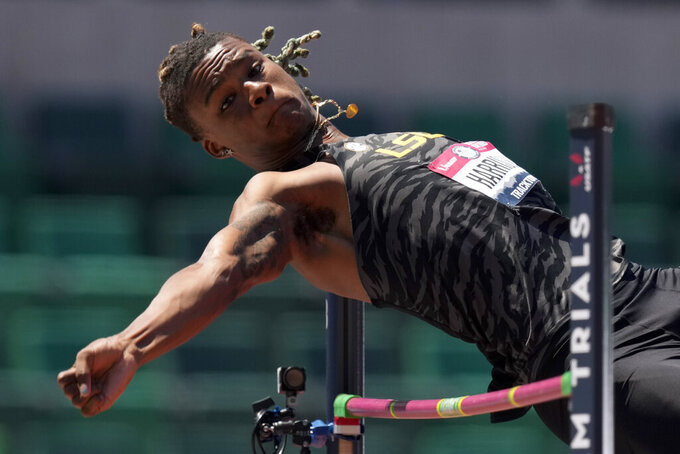 FILE - In this June 27, 2021, file photo, JuVaughn Harrison competes during the finals of the men's high jump at the U.S. Olympic Track and Field Trials in Eugene, Ore. Harrison will compete at the Tokyo Games in the long jump and the high jump. Not since the days of Jim Thorpe in 1912 has an American man made the team in those two events at one Olympics. (AP Photo/Charlie Riedel, File)

His assignment at the Tokyo Games couldn’t be any more rare: Go horizontal (high jump) and then vertical (long jump).

Not since the days of Jim Thorpe (circa: 1912) has an American man made the team in those two events at one Olympics. It’s akin to running the 100 meters and the 400. Or, as decorated triple jumper/high jumper Willie Banks remarked: “A race horse trying to do dressage like a Lipizzan stallion.”

From leaping into the sand to back-flipping over a bar, the 22-year-old Louisiana State standout (he just recently turned pro) brings his own style to the two events that are both about jumping — but have almost nothing in common after takeoff.

Harrison is already the U.S. and NCAA champion in both events, thanks to four straight victories in a pair of meets in Eugene, Oregon, last month.

Next up, the biggest meet of all.

“If he's able to pull off double gold, that would be insane,” said Mike Powell, who's been the world-record holder in the long jump since 1991. “To do that at 22? Oh man, I'd be amazed. I'm rooting for him. I'm definitely rooting for him. I want to see him do well."

For good luck, Harrison will be wearing a chain his mom gave him. As part of his pre-meet routine, he will eat a sub sandwich. He’s superstitious about that sandwich, too.

Luckily for him, there's a Subway sandwich shop a short distance from the Olympic Stadium.

“If it works, stick with it," said his coach, Todd Lane.

Lane has a carefully constructed workout plan for Harrison: One day with a high-jump focus. Another day with a long-jump focus. The rest of the time revolves around training and technique for the two varied forms of jumping. There's plenty of opportunity for recovery, too, because it “takes a toll on the body," Lane emphasized.

Count Banks as impressed, especially given Harrison's age and the different skill sets required for each.

“One measures how high the human body can jump and the latter how far a human can jump,” explained the 65-year-old Banks, the silver medalist in the triple jump at the 1983 world championships. "Usually, it takes two different people to indicate the best of the best."

Consider: The feat has been attempted on 48 occasions at the Olympics, 37 times by men and 11 by women, according to Olympic historian Bill Mallon. Most of those attempts were from way back in the day, though.

The only athlete to win gold in both events at the same Olympics, Mallon noted, was Ellery Clark in 1896 at the very first modern Games in Athens. The last to attempt it were Abdullah Mohamed Al-Sheib of Qatar and Danny Beauchamp of the Seychelles at the 1992 Barcelona Games.

Out of high school in Alabama, Harrison was recruited for the high jump. But Lane thought it might be good to incorporate some long jump, just to give his mind and body a rest from the other event.

“Probably after his sophomore year when he won the NCAA long jump outdoors did I start thinking it could be as close to (this) good,” Lane explained. “But even at that point, high jump was his better event.”

To further point out what an amazing venture his double was — both of the event finals at U.S. Olympic trials were on the same day, in temperatures that broke 110 degrees F (43 degrees Celsius).

Harrison says he's simply grateful he doesn't have to do both on the same day.