Lindahl is a steadying force in goal for Sweden at Olympics 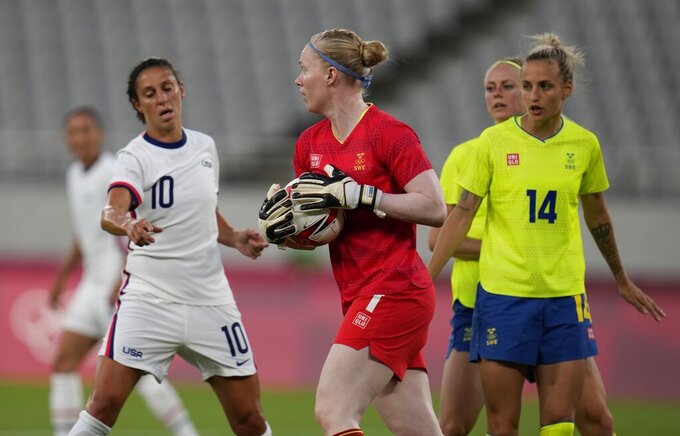 Sweden's anchor is a 38-year-old mother of two who has taken it upon herself to make sure athletes at the Olympics are environmentally conscious.

Hedvig Lindahl is the longtime goalkeeper for Sweden's national team, a veteran of four World Cups and five Olympics.

She was in goal Wednesday night when the Swedes upended the top-ranked U.S. women's national team 3-0 in Tokyo. The victory snapped a 44-match unbeaten streak for the Americans.

But before anyone wants to just hand Sweden a medal now, the steady Lindahl was trying to keep the victory in perspective.

“I know for a fact that you can go very far in any tournament, even if you lose to the USA or whoever you play in the first game," she said. “So in the end, I don’t know how much it means but for sure, we showed the world and ourselves that we can play well against a team like the U.S."

Lindahl was also on the team that bounced the United States from the Rio de Janeiro Games in the quarterfinals — the earliest ever Olympic exit for the Americans. She turned away six shots on goal in a 1-1 draw before prevailing in a penalty shootout.

While the team in Brazil bunkered on defense — earning a retort of “cowards” from United States goalkeeper Hope Solo — the team in Tokyo attacked the out-of-sorts Americans. Stina Blacktenius scored a pair of goals, and could have had more.

Lindahl credits the growth of women's soccer around the world, especially in Europe, for Sweden's success, because there are more opportunities for players to raise their game. Lindahl is currently playing professionally for Atletico Madrid.

“I think it’s the way that the football is developing. The teams from Europe can bring something else. It’s hard for the American team to maybe have that type of style," she said.

United States forward Christen Press said Sweden's strong performance was not unexpected: “I think there’s a few teams that we expect them to always be better in a world championship, and Sweden is one of them.”

Now Sweden sits atop Group G and is assuredly headed for the knockout round in Japan. But there are two remaining games in the group stage for the Swedes, the first against Australia on Saturday at Saitama Stadium.

Sweden has qualified for every Olympics since women's soccer joined the event in 1996. The team's best finish was the silver medal in Rio when they lost to Germany 2-1 in the final.

Lindahl, who shares two children with her wife Sabine, issued a challenge to other Olympians on her arrival in Tokyo. She asked that her fellow athletes try to use as few plastic water bottles as possible, and instead refill them or use reusable bottles.

"Floodings, heatwaves and other extreme weather around the world is a constant reminder of us having to do more," she said.

While she's appealing for conservation, Lindahl is also helping her team keep focused now that they've made some noise in the competition.

“We’ve been talking about different scenarios that can happen — maybe not (a medal) yet — but everything that we feel and things that we experience, we are facing with and open mind,” she said. "Hopefully we can still keep focused on what we’re supposed to do. I agree, I think now expectations will hit and you don’t know how it will affect each individual, but I think we are prepared for whatever emotion comes our way.”