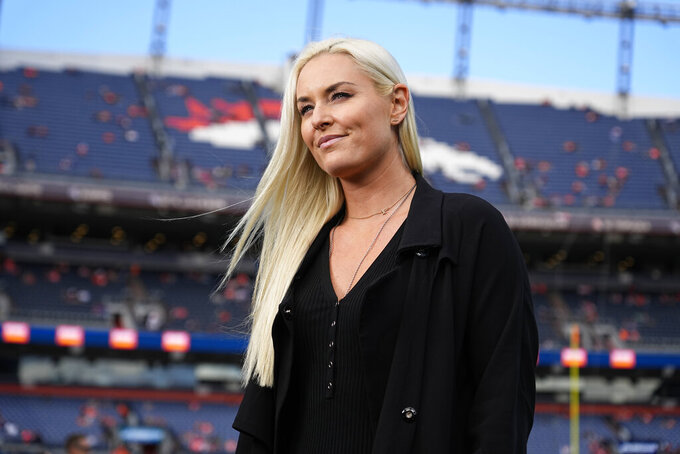 FILE - Lindsey Vonn stands on the sidelines prior to an NFL football game between the Philadelphia Eagles and the Denver Broncos, Nov. 14, 2021, in Denver. Vonn details in a column for The Associated Press on Tuesday, Dec. 28 the mental health challenges she faced after retiring from ski racing. The most successful female ski racer of all time says she needed to find a new outlet after releasing all of her troubles on the mountain for so many years. (AP Photo/Jack Dempsey, file)

EDITOR’S NOTE: Lindsey Vonn is the most successful female ski racer of all time with 82 career World Cup victories. She also won the downhill at the Vancouver Olympics in 2010 and has two other Olympic medals. “Rise: My Story,” her new memoir, will be published in January. Having retired from racing in 2019, Vonn is offering her thoughts on some of the current themes in sports in an occasional diary as told to AP Sports Writer Andrew Dampf.

When I retired almost three years ago, it wasn’t because I was ready to stop racing. It was because my body gave out. My surgically repaired knees couldn’t handle the strains of hurling myself down the mountain at 80 mph. For about a year after I retired, I couldn’t watch skiing — it was too depressing.

It was difficult to get my mind around retirement. Obviously, I always knew that would happen — every athlete has an end point. But for someone who is always in that “grind” mindset it’s not an easy thing to just shut off. So, I tried to set myself up in a way in which I would always have work as soon as I retired from skiing.

After retirement, I took a week for myself and then starting booking events and going to work. I was busier than ever. But just because I had work set up doesn’t mean that the transition was easy. It was hard. It was a new routine that wasn’t dictated by or around skiing.

From mental trials to physical trials, I had always used skiing as my outlet: No matter what was going on, I could retreat to the mountain. That was my happy place, a sort of meditation, and an escape.

Which is why it was difficult when skiing was no longer there when I retired. I had to find a different way to mentally sort through things. I didn’t have the outlet of skiing anymore. I didn’t have a “next race” or “next season” to make my comeback. I had to create new goals, with different tangibles and different timelines. It took me a while to find my place.

Now, I love that I can provide support and feedback for those going through any type of comeback — both mentally and physically. And, I’ve found a way to connect with skiing (and skiers) on another level.

Before and during last season’s world championships in Cortina d’Ampezzo, Italy, I went over video with Breezy Johnson and tried to help her out in any way I could. I think Breezy has the mental side of it pretty much dialed in. But I know that she knows that I’m always there if she needs me. Same with the other girls on the U.S. team. I’ve also developed a great relationship with Bella Wright. She’s very inquisitive and eager to learn and I love her energy.

Then there’s Sofia Goggia, the Italian who is the reigning Olympic champion in downhill. Like me, Sofia has battled back from a ton of injuries in her career. But when she’s healthy, there’s nobody faster. She’s gone through a lot in her life, and I’ve helped her through quite a bit of it the last couple years. She’s a very tough competitor and I think we have a lot of similarities in the way we approach things.

I want to encourage current and next generation skiers to reach out for help when you need it.

I learned how to deal with a lot of these things on my own. I internalized everything and kept it bottled up. When I was a teenager, mental health wasn’t a thing by far, and there was definitely — and still is — a stigma to it. Back then it was like, “Suck it up and bear it.” There are so many resources nowadays and good people willing to help. Reach out. I wish I had. There is no reason to feel alone in your struggles.

These days, my biggest challenge is multi-tasking and balancing all my different post-racing commitments. I’m a limited partner and a general partner on two different venture capital funds. I’m an advisor to a few companies. I still represent Under Armour, Rolex and Land Rover. And I’m designing my own ski wear.

So I have a lot going on but there’s not as much pressure on me from outside now; it’s more pressure that I put on myself. Actually, it’s just like when I was racing: The most pressure ever put on me was from myself.

Luckily, I know now that I’m not alone.