Lochte flops: Olympic career likely over after 7th in 200 IM 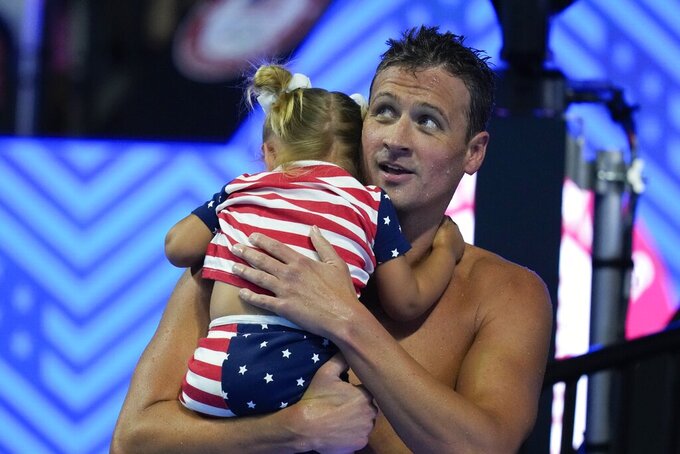 Ryan Lochte holds his daughter after his heat in the men's 200 Individual Medley during wave 2 of the U.S. Olympic Swim Trials on Thursday, June 17, 2021, in Omaha, Neb. (AP Photo/Charlie Neibergall) 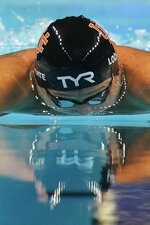 OMAHA, Neb. (AP) — After beating only one other swimmer, Ryan Lochte was the last one to climb from the pool.

He struggled to lift himself out of the water, undoubtedly feeling all of his 36 years after attempting to make one more Olympic team in the grueling 200-meter individual medley.

In the end, he didn't come close.

There won't be a chance for redemption in Tokyo.

After embarrassing himself five years ago in Rio de Janeiro, Lochte's bid for a fifth Olympics ended with a labored, seventh-place finish in the 200 IM at the U.S. swimming trials Friday night.

Youth was served in a race that requires one lap using each of swimming's four strokes.

That was something Lochte just didn't have.

Michael Andrew — 14 years his junior — romped to victory by going under world record pace over the first three laps and holding on in the freestyle for a winning time of 1 minute, 55.44 seconds.

Chase Kalisz, who already had won the 400 individual medley at these trials, claimed another Olympic event by finishing next in 1:56.97.

Lochte lagged far behind, touching in 1:59.67. That was nearly 6 seconds off the world record he still holds, a time of 1:54.00 from the 2011 world championships in the prime of his brilliant career.

A tearful Lochte wouldn't go as far as saying his swimming days are over.

But this was surely his last realistic shot at the Olympics. Even though the Paris Games are just three years away, Lochte will be approaching his 40th birthday when France takes over the hosting duties.

“I really wanted to be on this Olympic team,” Lochte said. “This is probably my most important swim meet that I’ve ever had in my entire career, the one that meant the most to me. So falling short and feeling like I let everyone down was one of the hardest things.”

A 12-time Olympic medalist, not to mention the winner of 27 medals at the world championships, Lochte seemed to recognize that his legacy was greatly impacted by his shenanigans five years ago.

During a boisterous night in Rio with several younger teammates, Lochte lied about being robbed at gunpoint. His story quickly fell apart, revealing a swimmer whose life was barreling out of control.

Lochte arrived in Omaha insisting he had turned things around. He is now married with two young children, who were all on hand at poolside to cheer him on.

Cradling his daughter made the sting of defeat a little easier to take.

“I had my family there,” Lochte said. “My kids got to watch their daddy swim, so that means everything to me.”

Everyone in the race sensed the significance of the moment. Kalisz waited at the edge of the pool to dole out a hug. Andrew did the same.

Even Michael Phelps, Lochte's longtime rival who retired after the 2016 Rio Games, came down the from the stands to embrace Lochte.

“He's a legend in the water,” Andrew said. “He's done some incredible things. To share the pool with him is always an honor.”

Initially entered in six events, Lochte dropped most of them and went all in on the 200 IM — the only race where he had a realistic chance of qualifying.

He made it through to the final,

That's where age finally caught up with him.

“I still want to race, but as far as another Olympic trials, I don’t know about that,” Lochte said. “I'll be (almost) 40. That’s pushing it.”

In other events, Ryan Murphy romped to victory in the 200 backstroke, adding to his triumph in the 100 back, while Abby Weitzel won the 100 freestyle after defending Olympic champion Simone Manuel shockingly failed to advance from the semifinals the previous night.

Lilly King also booked a second event in Tokyo, though she didn't tough the wall first. The outspoken American settled for the runner-up spot in the 200 breaststroke, touching the wall nearly three-quarters of a second behind Annie Lazor.

King had previously won the 100 breast.

Caeleb Dressel, who is expected to succeed Phelps and Lochte as the big star in the U.S. men's team, looked unbeatable in the semifinals of the 100 butterfly. He led the way in 49.76, while no one else cracked the 50-second barrier.

Murphy set himself up to go for another backstroke-double in Japan, leading the entire race to post a winning time of 1:54.20.

The 25-year-old Floridian, who trains in California, swept both races at the Rio Games. The American men haven't lost a backstroke race at the Olympics since 1992 in Barcelona.

“Obviously, I want to go in there and win. I'm as competitive as anyone,” Murphy said. “But it doesn't make or break my life.”

Bryce Mefford took the likely second Olympic spot behind Murphy in 1:54.79. No one else was within a second of the top two.

Lazor had just missed out on a spot in the 100 breast, settling for third in an event that King has dominated.

But the 26-year-old Michigan native earned her first trip to the Olympics in the longer breaststroke event.

King gave Lazor a big hug over the lane rope.

Hinds became the first Black swimmer to make this Olympic team, an especially poignant moment in light of Manuel's struggles with overtraining syndrome.

“I really feel for Simone and hope she’s able to get better," Hinds said, “because we’d definitely love to see her in Tokyo.”