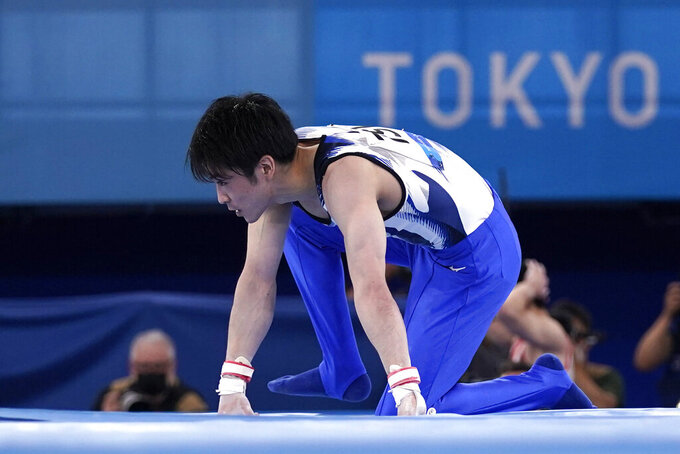 Kohei Uchimura, of Japan, falls from the horizontal bar during the men's artistic gymnastic qualifications at the 2020 Summer Olympics, Saturday, July 24, 2021, in Tokyo. (AP Photo/Gregory Bull)

TOKYO (AP) — Kohei Uchimura spent a decade redefining the standard of excellence in men's gymnastics. The two-time Olympic champion's combination of grace and precision — coupled with a soft-spoken humility that did its best to downplay his otherworldly talent — made him a superstar in Japan and widely revered everywhere else.

The man they call “King Kohei” didn't need to stick around for the Tokyo Olympics. He did anyway, throwing himself back into the gym as he entered his early 30s in a quest for one more flash of brilliance in front of the country where he has long been a household name.

Still, things never quite felt right. The coronavirus pandemic pushed the games back a year. Injuries accrued from a quarter-century of pushing his body to the limit kept cropping up. Yet he somehow managed to will himself into an individual spot on the Japanese Olympic team, fending off challenges from younger athletes who grew up idolizing him.

The glorious sendoff, however, never materialized. The stands inside the Ariake Gymnastics Center were largely empty when Uchimura saluted the judges before his high-bar set during Olympic qualifying on Saturday. For 30 seconds he turned his signature event into a time machine, executing a series of daring releases with the casual confidence that defined his prime.

In a flash, it changed. It always does in gymnastics. First his right hand came off the bar. Then his left. Suddenly, he was on the mat. The small gathering of coaches, administrators and dignitaries who stopped to watch let out a small gasp. Slowly, Uchimura stood up, gathered himself and hopped back up for potentially one last ride.

He drilled his dismount — of course he did — then made a brief wave. His score of 13.866 wasn't anywhere close to the top eight, the cutoff to reach the event finals later in the Games.

While the Japanese team moved on from high bar to floor exercise, Uchimura quietly packed up his team bag, pulled on a jacket and disappeared.

“In the last three Olympic Games, I could perform what I could have, what I could practice,” Uchimura said through a translator. “But not this competition.”

Whether it's his last remains to be seen. The world championships are in Japan in October. That's only three months away. It's possible he sticks around. He said he will have to think about it.

Uchimura made it a point, however, to stress he wasn't disappointed. He wasn't sure he could even earn an Olympic spot, not with a loaded group of Japanese gymnasts who entered the sport around the time he won the first of his six world all-around titles in London in 2009.

Daiki Hashimoto, just 19, raced to the top of the leaderboard during qualifying with a performance that could best be described as Uchimura-lite. The four-man Japanese team, all first-time Olympians, hardly looked bothered by the stakes or the pressure of delivering at home.

In short, they looked just like Uchimura did for years on end. Composed. Charismatic. Precise. Hashimoto believes the group that will go for gold during the team finals on Monday is better than the one Uchimura guided to the top of the podium in Rio de Janeiro five years ago.

Uchimura doesn't necessarily disagree. He watched Japan's final four rotations and drank in the moment as the program he stewarded to glory moved on without him.

“I found them sorting out problems by themselves,” Uchimura said. “So I thought, I’m not needed at that level. All right.”