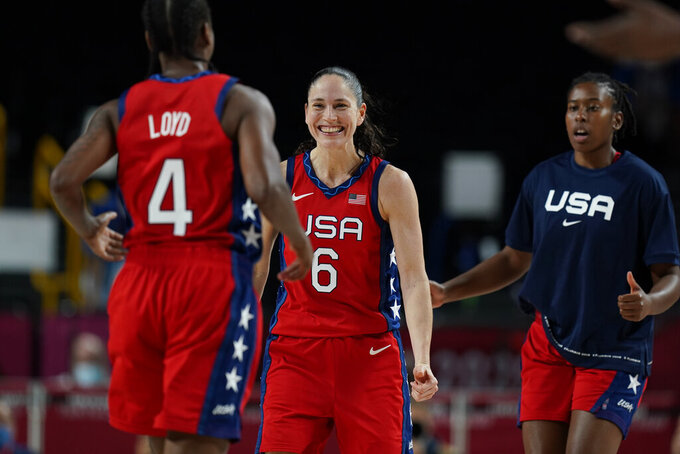 The Tokyo Games are no different. With six newcomers on the team, USA Basketball’s latest crop of Olympic rookies is giving early indications of being more than up to sustaining the standard of excellence in the American’s pursuit of a seventh straight gold medal.

A’ja Wilson has led the U.S. in scoring each of the first two games. Chelsea Gray and Jewell Loyd are providing a spark in the backcourt. Gray is playing meaningful minutes off the bench, and Loyd added 12 points Friday in a 86-69 win over Japan.

This team hasn't been as sharp as coach Dawn Staley would like though players and coaches say they are getting better with each practice and game.

“It helps when you have great leadership and also when you're here with your best friend Stewie (Breanna Stewart) it makes it a lot easier," Loyd said. “It also makes you feel comfortable. The veterans have made it very easy for me to just fit in and do what I do."

It's been that way since the U.S. women's national team started its streak of six straight gold medals.

— 2000: Six newcomers joined the roster as the Americans won their second straight gold at the Sydney Games.

— 2004: Sue Bird and Diana Taurasi were among seven Americans making their Olympic debuts at the 2004 Athens Games.

Stewart was one of three newcomers at the 2016 Rio Games with Brittney Griner and Elena Delle Donne. Both Stewart and Griner are at the Tokyo Games, though Delle Donne didn't make a repeat appearance here as she recovers from a second back surgery.

Wilson is among the newcomers on this roster along with Loyd, Gray, Skylar Diggins-Smith, Ariel Atkins and Napheesa Collier. Left off was Nneka Ogwumike, the 2016 WNBA MVP still looking for her first Olympics berth after being left off while recovering from a sprained knee when the roster was set.

Even on a roster featuring talented post players like Griner, Stewart, Fowles and Tina Charles, Wilson has stood out. The reigning WNBA MVP has had a double-double starting each game and knows the shoes she's trying to fill with the national team.

“The legacy is just still surreal to me honestly,” Wilson said. “I remember just playing USA Basketball U-19 and now I'm ... on the big team and it's pretty awesome.”

By the time USA Basketball picks the roster for the 2024 Paris Games, Wilson is poised to be the veteran. UConn star Paige Bueckers, the AP Player of the Year as a freshman, will likely be leading the next group of newcomers.