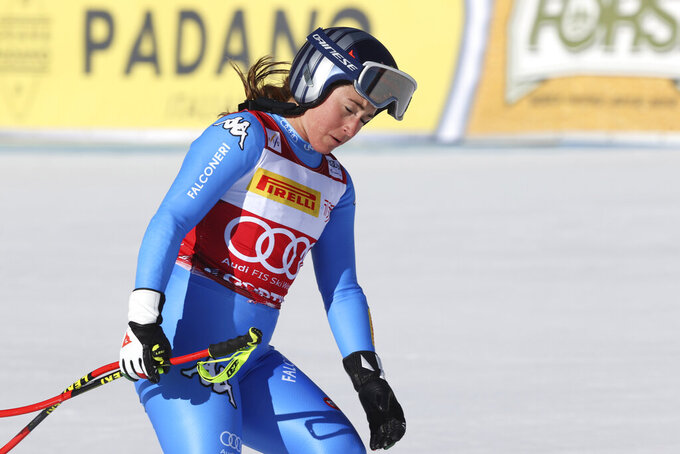 MILAN (AP) — Defending snowboard cross gold medalist Michela Moioli will replace Sofia Goggia as Italy’s flag bearer for the opening ceremony of the Beijing Olympics after the latter’s injury over the weekend.

The Italian Olympic Committee announced the change on Tuesday after president Giovanni Malagò spoke with Goggia about her rehabilitation program.

Goggia was injured during a World Cup super-G in Cortina d’Ampezzo on Sunday. The 29-year-old skier sprained her left knee, partially tore a cruciate ligament and has a “minor fracture” of the fibula bone in her leg, along with some tendon damage.

The opening ceremony is on Feb. 4.

Moioli, who won Italy’s first gold medal in snowboarding at the 2018 Pyeongchang Olympics, was slated to carry the country’s flag at the closing ceremony. CONI will announce her replacement in the coming weeks.

“I’m sorry for what happened to Sofia, it’s as if she’s passing me this baton,” Moioli said.

Goggia became the first Italian woman to win an Olympic downhill when she beat Ragnhild Mowinckel and Lindsey Vonn in Pyeongchang.

Goggia has started physical rehab with the aim of returning in time for the Olympic downhill at the Beijing Games on Feb. 15. She will likely miss the giant slalom on Feb. 7 and the super-G on Feb. 11.