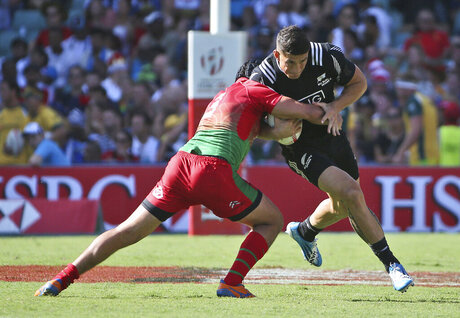 By: STEVE McMORRAN (AP)
WELLINGTON, New ZealandCopyright 2020 The Associated Press. All rights reserved. This material may not be published, broadcast, rewritten or redistributed.
-41.2866174.776

WELLINGTON, New Zealand (AP) — When rugby sevens was added to the rollcall of sports for the 2016 Summer Olympics, New Zealanders rubbed their hands in gleeful anticipation.

Rugby, as a 15-a-side sport, had last been part of the Olympics program in 1924 when the United States defeated France in the gold-medal match. If any nation seemed well placed to benefit from rugby's return to the games after 92 years, even in its compact form, it was New Zealand — home of the famed All Blacks.

By 2009, when the IOC voted to include rugby sevens for the 2016 Games in Rio de Janeiro, New Zealand men's teams had won the world series in eight of its 11 seasons since its creation in 1999. It has won it four more times since, hardening the belief that the gold medal in the men's competition was New Zealand's to lose.

And there was the exciting prospect also of a gold medal in women's sevens. To some degree these were uncharted waters for New Zealand and most other nations: women's rugby sevens barely existed in an internationally competitive form before it became an Olympic event.

New Zealand had a well-established and successful women's rugby team — the Black Ferns — who had been almost as dominant in the women's international game as the All Blacks in the men's. But women's sevens was new and while it was expected players from the 15-a-side game would easily translate, it was also recognized new talent was needed.

So New Zealand, and many other rugby nations which sensed an Olympic opportunity, sent out a rallying call to its best female athletes. New Zealand Rugby advertised open tryouts and invited the best from other women's sports.

The result was a team drawn not just from rugby but from basketball, netball, touch — rugby's non-contact form — track and field, softball. It seemed a recipe for Olympic success.

But all has not gone quite to plan for the New Zealand women. In the 2014-2015 season, they were clearly the best team in the world but in the season just ended Australia took over as No. 1 by reaching three of the five finals on the world series.

New Zealand's "Sevens Sisters" made only two of the five finals and failed to win a title at any tour stop, placing second overall, and dulling the bright confidence that the gold medal was within reach.

Countries which had never previously adopted rugby with enthusiasm flocked to the game and sped their development. Nations that had played the game with limited success became more focused and competitive.

At the end of the world series, Canada was ranked third in the women's game, Russia seventh and Spain ninth. The field lay more open than most could have expected.

New Zealand captain Sarah Goss remains optimistic and says the team is approaching its potential as senior players return from injury and newcomers settle in.

"We're going to show we're a pretty powerful side come Rio," Goss said. "We've done a lot of work and ... by August we'll come in fighting."

Indicative of the women drawn to sevens by its Olympic inclusion is Niall Williams, sister of the All Blacks and sevens star Sonny Bill Williams. Niall Williams, a mother of two, was a touch rugby player before switching to sevens.

"A lot of skills transfer over from touch but the contact area was the hardest thing to pick up," Williams said. "But I do have two big brothers to help out with that."

The outlook for the New Zealand men's team is far less favorable than it appeared seven years ago. New Zealand's grip on the world series title has slipped.

Fiji has won the last two world championship titles and likely will start as favorite in Rio. In all, there were six winners in 10 world series tournaments including New Zealand (with three), South Africa, Samoa, Kenya and Scotland.

England, Australia, the United States and Argentina the teams which could finish on the Olympic podium without causing any surprise.

The 2016 season has been a tough one for veteran coach Gordon Tietjens, a famously hard taskmaster whose fitness sessions can reduce even the hardest player to jelly. But his program has been hampered by a heavy injury toll and the intermittent availability of Super Rugby players. When he put a call out to All Blacks players to join the team fpr Rio only Sonny Bill Williams and Liam Messam signed up. Williams made the final cut, Messam did not.

"Sevens has rejuvenated me," Williams said. "My sister is in the New Zealand Sevens squad, too, so it's massive for our family."

Tietjens says sevens is much more globally competitive now, and while it has outstanding athletes such as Williams New Zealand's pre-eminence can't be taken for granted.

"Contrary to perception, there's not massive sevens depth in New Zealand. We've got a lot of rugby players but not a lot of sevens players," Tietjens said. "When you get injuries like we had this year, it's horrific."

The New Zealand men have been drawn with Britain, Kenya and Japan in Pool C of the Olympics tournament; the New Zealand women in Pool B with France, Spain and Kenya.