The Next One: Japan's Hashimoto takes gold in gymnastics 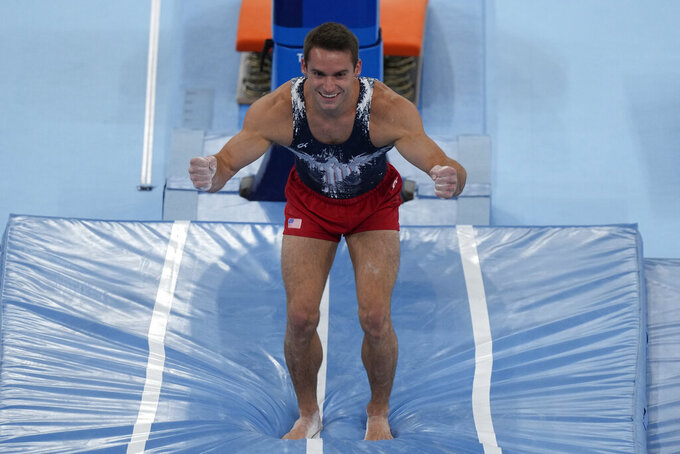 Samuel Mikulak, of the United States, performs on the vault during the artistic gymnastic men's all-around final at the 2020 Summer Olympics, Wednesday, July 28, 2021, in Tokyo. (AP Photo/Gregory Bull)

TOKYO (AP) — Daiki Hashimoto grew up watching Kohei Uchimura win gold medals, just like every other aspiring Japanese gymnast over the past decade-plus.

Yet the idea of carrying on the legacy Uchimura built during his gold medal-laden career hardly bothers the 19-year-old Hashimoto.

In fact, he's embracing it.

Hashimoto gave Japan its third straight Olympic title in the men's all-around on Wednesday night, using a thrilling high-bar routine during the final rotation to slip past China's Xiao Ruoteng and ROC's Nikita Nagornyy for gold.

Hashimoto's total of 88.465 was four-tenths ahead of Ruoteng, who was dinged a three-tenths deduction after forgetting to salute the judges during the final set.

It ultimately didn't matter. Hashimoto is developing a reputation as one of the best high bar performers in the world. His brilliant set in the team final nearly allowed Japan to nip the team representing the Russian Olympic Committee for gold.

There was no uncertainty this time. Nagornyy approached Hashimoto before Hashimoto stepped onto the podium and told the young phenom to go do his thing.

A series of intricate releases followed before Hashimoto finished with a drilled dismount and a roar from the members of the Japanese federation and assorted volunteers sprinkled throughout the Ariake Gymnastics Centre. A few feet away, China's Xiao Ruoteng nodded, well aware his total of 88.065 wasn't going to stand.

Hashimoto's second near-flawless set in three days looked so easy it was difficult to remember this was an Olympic final and not some random Wednesday night in the gym.

“I didn't feel any pressure or nervousness,” Hashimoto said through a translator. “I just tried to enjoy the competition with (myself).”

Something Nagornyy didn't quite do. He delivered during the team final that allowed ROC to win the first Olympic title for Russia since 1992. Two days later, he was good. Just not spectacular. His high bar routine was clean but lacked Hashimoto's difficulty.

When Nagornyy walked back to his teammates, he wadded up the athletic tape he was wearing into a ball and threw it in frustration.

“I feel like we were judged fairly,” said Nagornyy, the 2019 world champion. “It was just my fault that I couldn't do my best.”

Nagornyy blamed part of the problem on simply trying too hard.

“When you try to do more than you can, that's why you do worse,” he said. “I tried to stick every single element, and there's a saying 'You shouldn't try to stick everything, because then you won't.”

Just 48 hours after a taut team final between the sport's three superpowers, the all-around final was much of the same. Hashimoto, Ruoteng, Nagornyy and Sun Wei were never separated by more than a handful of tenths as they made their way around the gym.

It was going to come down to high bar because it almost always does. The apparatus is a test of creativity, daring and nerves. Hashimoto navigates it as someone who's been on the stage for years, not a newcomer.

Then again, he should be around a while. Uchimura, who made the Japanese team as an event specialist but did not advance to the high bar final, was a silver medalist in Beijing at age 19. Hashimoto has already done him one better.

“Although I want to follow what Uchimura has built and founded in the last decades in gymnastics, I want to lead as a next-generation gymnast in Japan," he said.

The teenager with the talent and unbridled ambition is already there.

Mikulak, who has championed the importance of mental health, praised teammate Simone Biles for deciding to remove herself from competition during the team and all-around finals after feeling she wasn't mentally prepared.

“She seems like she’s in good spirits," Mikulak said. “She’s very happy with her decision.”