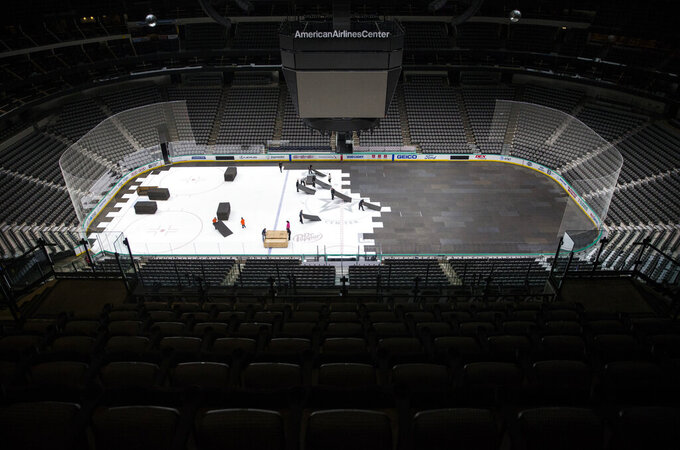 FILE - In this March 12, 2020, file photo, crews cover the ice at American Airlines Center in Dallas, home of the Dallas Stars hockey team, after the NHL season was put on hold due to the coronavirus. Deputy Commissioner Bill Daly told The Associated Press on Sunday, July 5, that the NHL and NHL Players’ Association have agreed on protocols to resume the season. Daly said the sides are still negotiating a collective bargaining agreement extension. A CBA extension is still crucial to the process. (Ashley Landis/The Dallas Morning News via AP, File)

The NHL is in position to resume playing in less than a month — with 24 teams in action, all in Canada — and could be on the verge of enjoying labor peace through 2026.

The National Hockey League and the NHL Players' Association on Monday announced a tentative deal on a return-to-play format and a memorandum of understanding on a four-year extension of the collective bargaining agreement.

Should both agreements be ratified, the NHL would proceed immediately to its expanded 24-team playoff format, with play beginning on Aug. 1. Under the plan, training camps would open July 13, with teams traveling to their respective hub cities for exhibition games on July 26.

The hub cities are Toronto and Edmonton, Alberta, for the qualifying round and at least first two playoff rounds, according to a person with direct knowledge of the agreements who spoke with The Associated Press on condition of anonymity because the league and NHLPA have not released this information.

For the conference finals and the Stanley Cup Final, the person said, the league is being cautious and allowing itself site flexibility in the event of potential spikes in COVID-19 infections.

Extending the CBA, which was set to expire in September 2022, was considered a necessary step in restarting the season, which was placed on pause in March as a result of the pandemic. The extension covers numerous on- and off-ice issues, including the NHL's potential return to the Olympics, the person said.

If approved, players would be in a position to compete at the Beijing Olympics in 2022 and in Italy four years later. In order for that to happen, the NHL would first have to resolve marketing rights and health insurance, among otehr issues, with the International Olympic Committee and International Ice Hockey Federation.

The NHL, NHLPA and IIHF had what were called productive talks earlier this year. The NHL participated in five consecutive Olympics from 1998-2014 before skipping 2018 in South Korea.

Financially, the CBA extension would attempt to address the lost revenue stemming from the remainder of the regular season being wiped out and with empty arenas looming for the playoffs.

Players would defer 10% of salaries next season which owners would pay back over three consecutive seasons starting in 2022-23, a second person familiar with the proposed agreement told The AP. The salary cap will remain at $81.5 million for at least next season, the person said, also speaking only on the condition of anonymity because the details have not been released.

Escrow payments to owners to even out hockey-related revenue at 50/50 would be capped at 20% next season, with the cap decreasing throughout the deal, the second person said. If owners are still owed money from the players, the CBA would be extended for an additional season. Escrow has been one of the biggest complaints of players in the past several years.

On the union side, the agreements must first be approved by a majority of the NHLPA’s 31-member executive committee before going to a vote to the full membership. The executive committee is expected to make its recommendation by the end of day Tuesday; if approved, the players would be expected to complete their voting process by Friday.

Over the weekend, the league and players agreed to an extensive series of return-to-play protocols involving training camp and games. Players will be allowed to opt out of competing in the expanded playoffs, and will have three days to make their decision once the agreement is ratified.

Should the league push ahead, the matchups are already known: The top four teams in each conference (Boston, Tampa Bay, Washington and Philadelphia in the East and St. Louis, Colorado, Vegas and Dallas in the West) play a handful of round-robin games to determine seeding.

Those top seeds then face the winners of eight opening-round, best-of-five series: No. 5 Pittsburgh Penguins vs. No. 12 Montreal Canadiens; No. 6 Carolina Hurricanes vs. No. 11 New York Rangers; No. 7 New York Islanders vs. No. 10 Florida Panthers; No. 8 Toronto Maple Leafs vs. No. 9 Columbus Blue Jackets; No. 5 Edmonton Oilers vs. No. 12 Chicago Blackhawks; No. 6 Nashville Predators vs. No. 11 Arizona Coyotes; No. 7 Vancouver Canucks vs. No. 10 Minnesota Wild; and the No. 8 Calgary Flames vs. No. 9 Winnipeg Jets.