No masks, no worries — for now; Aussies preparing for Tokyo 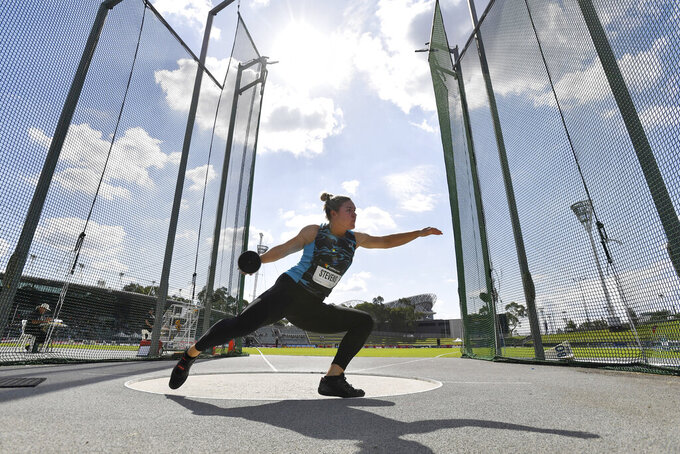 Dani Stevens competes in the women's discus at the Australian Track and Field Championships in Sydney, Sunday, April 18, 2021. Former world champion Stevens has been selected to the Australian team for her fourth Olympics less than a year after fearing she'd miss the Tokyo Games because of a career-threatening neck injury. (Dean Lewins/AAP Image via AP)

Dani Stevens won a record 14th national title in the women's discus throw on Sunday to earn her spot on the Australian team for a fourth Olympics, less than a year after fearing a career-threatening neck injury could force her out of the Tokyo Games.

With the coronavirus relatively under control in Australia, there was no sign of masks or much in the way of COVID-19 restrictions for athletes or spectators during the national championships at Sydney’s Olympic Park this week. It’ll be a different scene in Japan in just over three months when the delayed Olympics are held in a tight quarantine bubble.

The 32-year-old Stevens said she can empathize with Olympic rookies who feel they might miss out on the full experience of the games, but she thinks the honor of competing at the “most prestigious” sporting event in the world outweighs the restrictive conditions.

“We understand what the world is like at the moment. Being in a bubble — common sense says that’s what we have to do, so that’s what we have to do,” Stevens, a world champion in 2009 and runner-up in 2017, told The Associated Press. “We make decisions every day to put us in the best possible scenario to perform, and this is just one of those things that come with the territory this year.

“If you want to go to the Olympics this year, you’re just going to have to adapt.”

The initial 20 of an expected 70 track and field athletes were confirmed on the Australian Olympic team on Sunday, including Stevens, decathletes Ash Moloney and Cedric Dubler and sprinter Rohan Browning, the first Australian man since the Athens Games in 2004 to qualify for a spot in the 100 meters.

Almost half of the Australian track and field athletes already selected will be making their Olympic debut in Tokyo, which will open on July 23 after a delay of 12 months because of the COVID-19 pandemic.

With coronavirus cases surging in Japan, where about 9,500 deaths have been attributed to COVID-19, organizers are imposing strict conditions including a ban on foreign fans — including family members of athletes — at the Olympics

Athletes will have to stay inside a so-called Olympic bubble, which revolves around secure accommodation, training and competition venues and transport, and will be limited as to how long they can stay in Japan. Sightseeing and experiencing the local culture will not be part of this Olympic experience for athletes.

Stevens knows some athletes will miss having family, friends and mentors around, and said that's where she and other experienced Olympians will have to help fill a void.

And besides, she said, “with technology, if you wanted to, within 10 minutes of your competition, you could be FaceTiming your family back at home. There’s ways to feel connected and supported.”

Stevens was undergoing intense rehabilitation from surgery last year to repair damage to her neck sustained while training in the gym. She lost feeling in her right arm — her throwing arm — and really wasn't sure she'd make it to another Olympics.

“It was very scary. The uncertainty of it all. I’d never had surgery before. So spinal surgery, going in through the front of your neck was pretty terrifying, but I just tried to take it one day at a time.

“It was a long 12 months of rehab. I hoped that I could come back to discus, but my priority was just getting function back for everyday life stuff, in the beginning."

Postponing the Olympics gave Stevens renewed hope. She said she's been focusing on the “little wins” since last July.

After throwing an Olympic qualifying mark earlier this year, another of those “little wins” was the national title on Sunday, ensuring selection for Tokyo, despite her mark of 62.74 meters being more than 6 meters off her personal best.

Australia’s domestic track and field season was seriously curtailed in 2020 because heavy lockdowns in some cities, particularly Melbourne where the majority of the country's 910 coronavirus-related deaths were reported.

But with domestic travel restrictions mostly lifted and life returning toward normal in most of the country, Stevens said there was more of a buzz than usual at the nationals over the last week.

“You just kind of feel it ... there’s just such an excitement and an aura around it,” she said. “I think because no one has competed in such a long time ... everyone is so excited and so pumped.

“It’s an Olympic year again, they’re on, and everyone is really excited for that."