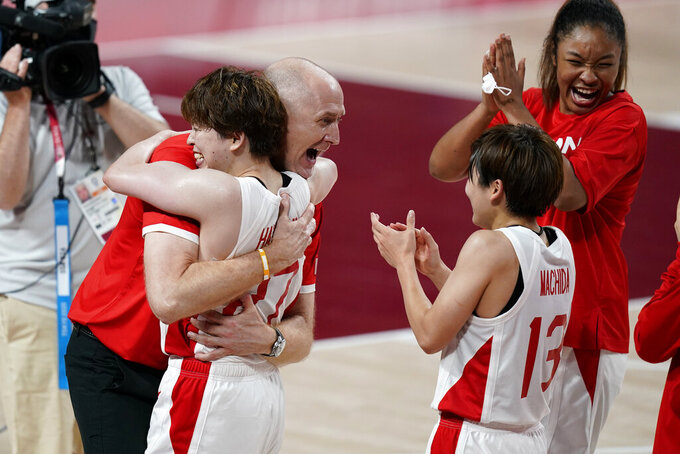 SAITAMA, Japan (AP) — Tom Hovasse spoke of the unthinkable when he was hired as the head coach of Japan’s women’s basketball team.

The Durango, Colorado, native, who speaks fluent Japanese, wasn't misquoted when he said he would have his team playing for gold at the Tokyo Games against the U.S.

Now, he is one win away from being a man of his word.

“They thought I was crazy,” Hovasse said. “They don't think I'm crazy anymore. We have a legitimate shot if we continue to play with this level of energy and determination.”

The Japanese edged Olympic newcomer Belgium 86-85 in a thrilling quarterfinal Wednesday to reach the medal round for the first time in the country's history. The host nation will play France on Friday in a rematch of their Olympic opener that Japan won 74-70.

Ranked 10th in the world coming into the Olympics, Japan joins an elite group in the semifinals.

The U.S. is going for a seventh straight gold medal, while France won silver at the 2012 London Games. Serbia won bronze at the 2016 Rio Games.

“Japan’s never been this far,” said Hovasse, 54. “We have two more chances to show our brand of basketball. Our goal is to win a gold medal.”

The Penn State alum who played two games averaging 2 minutes with the NBA’s Atlanta Hawks in the 1994-95 season is a big reason why the host nation is in the semifinals at these Olympics.

The 6-foot-8 Hovasse played in Japan for 10 years and returned in 2009 to coach in the Japanese league. He was an assistant coach with the Japan team that finished seventh at the 2016 Rio Games and was hired in January 2017 as the first foreign-born head coach of Japan’s national team.

The average height of Japan's team is 5-9, with only two players taller than 6 feet: captain Maki Takada and forward Himawari Akaho, are both 6-1. Hovasse doesn't dwell on what he doesn't have, he focuses on the team's strengths: Speed, aggressive defense and an abundance of 3-point shooters.

Nobody in this tournament has shot better from 3-point range than Japan, which knocked down 19 treys in a rout of Nigeria to wrap pool play. Japan was 14-of-33 against Belgium with Yuki Miyazawa making seven 3-pointers, though everyone on the roster can shoot from long distance.

Japan uses its speed to apply full-court pressure against opponents from the opening tip.

Hovasse said he is amazed at the level of dedication of his players, which makes his job easy.

He has 12 “gym rats” constantly working to improve, and believes Japan started earning respect with its play at the Rio Games. Getting his players to understand how good they could be was a big key to raising their level of play.

U.S. coach Dawn Staley said the Japanese are disciplined and force an opponent to keep moving, calling it beautiful to watch but difficult to play against. Staley also predicted Japan could stick around after the Americans beat Japan 86-69 in pool play.

“I do think they’re in a position to medal here just because of their style of play, and they’re efficient and they put you back on your heels," Staley said after the U.S. knocked them off.

Due to the coronavirus pandemic, Japan won't enjoy the kind of homecourt advantage it would have as the host nation. No fans are allowed at these games, but there are enough volunteers and spectators on hand that Hovasse said the atmosphere during the quarterfinal was so electric the Saitama Super Arena felt packed.

If fans could attend, Hovasse said “obviously, they'd give us a huge boost."

Despite a mostly empty arena, his bold prediction of beating the Americans for gold in Tokyo Games is still on the table.

“Everybody laughed at me," Hovasse said. “I don't know, there might be some people starting to believe now.”