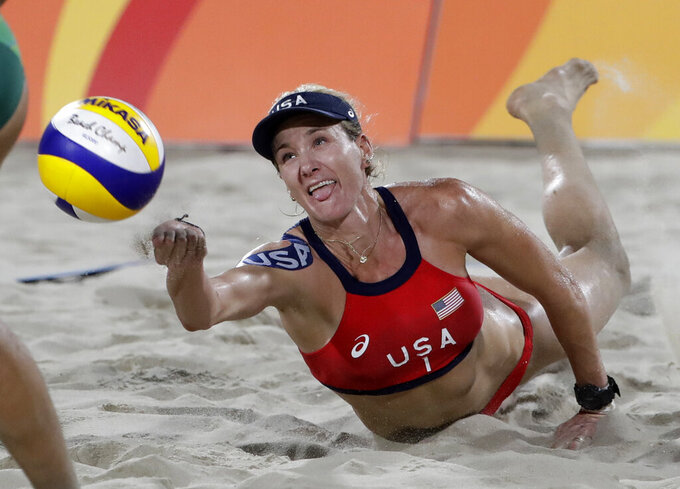 FILE - In this Aug. 17, 2016, file photo, United States' Kerri Walsh Jennings digs for a ball while playing Brazil during the women's beach volleyball bronze medal match of the Summer Olympics in Rio de Janeiro, Brazil. During the coronavirus pandemic, beach volleyball star Walsh Jennings has been doing online talks with young volleyball players, including one with the team at her alma mater of Archbishop Mitty H.S. in California. (AP Photo/Marcio Jose Sanchez, File)

CHICAGO (AP) — When Jesse Smith looks out at his Zoom audience, he knows exactly what the crowd is going through.

The captain of the U.S. men’s water polo team is adjusting his training, too. He also misses playing alongside his friends.

One way Smith is dealing with the coronavirus pandemic is through virtual speaking engagements with water polo clubs and teams all over the country, passing along what he has learned during a couple decades in the water.

The 37-year-old Smith is one of several Olympic athletes who have been using digital avenues to help their sport during the shutdown. While Zoom sessions are a frequent choice, some athletes are offering training tips on Instagram and Olympic federations are pitching in with newsletters and other web-based help.

“We're all as athletes affected the same way,” Smith said. “Even though I'm a four-time Olympian, a silver medal (winner), training for my fifth Olympics, the captain of my team, the same thing is going on in my head as a 16-year-old that got their (season) canceled, and I think that I have more tools available, so I'm trying to share that."

Beach volleyball star Kerri Walsh Jennings has been doing online talks with young volleyball players, including one with the team at her alma mater of Archbishop Mitty High School in California. U.S. wrestlers Mallory Velte, Pat Smith and Yianni Diakomihalis detailed their at-home workouts in a post on the federation website. Casey Patterson and April Ross were among a group of beach volleyball players who shared workout tips during Facebook live sessions on the AVP page.

The federations also are reaching out. USA Water Polo has been sending out a weekly newsletter called “At Home with USA Water Polo” featuring interviews with coaches and athletes. U.S. Rowing has been holding webinars for its members. USA Volleyball has a page on its website with COVID-19-related resources.

“A lot of people look to (us) in the athlete world, in our communities, for us to kind of be a voice. Like, how are we going to respond? What actions are we taking?” said U.S. softball pitcher Monica Abbott, who has been doing speaking engagements with young softball players and holding pitching-inspired workout sessions.

The effort by Olympic athletes and federations comes amid concern about the future of college sports. Some Olympic sports could be on the chopping block for athletic departments looking to save money after losing revenue due to the COVID-19 shutdown.

“I wouldn't say that that's something I'm focusing on, but it's definitely something that's in my mind and helps me plan for these,” U.S. water polo center Matt Farmer said, “because I'm taking an optimistic view of what's going to happen in college water polo, because it means so much to so many people.”

Farmer, a 24-year-old Chicago native who played on three NCAA championship teams at UCLA, is focusing his outreach efforts on the Midwest. California is the home of American water polo, but Farmer is hoping he can help some young players follow in his footsteps.

“I kind of blazed a trail from Chicago to international water polo,” Farmer said, “and I want to share my experiences with people and maybe give advice to people who are thinking about playing in college or continuing the sport and just want to grow as players and as people.”

The online conversations usually touch on a variety of topics. There are the usual practical tips for playing the sport at a high level, but there also are elements of sports psychology — especially with young players away from their teams and searching for motivation.

Walsh Jennings, a three-time Gold medalist, said the calls have become a highlight of her day.

“We're all feeling the same frustrations and longings,” she said. “It's pretty special to be able to speak to the fact that we're not alone in this and that it is up to each of us to make the best of what we have to work with — to focus on that which we can control.”