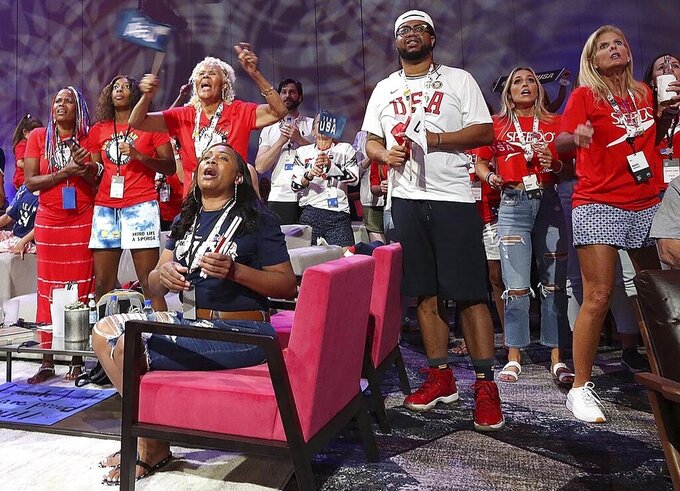 Venus Jewett, back left, mother of Olympic runner Isaiah Jewett, watches her son compete in the 800-meter race and reacts as as Isaiah failed to make the finals as she joins other family and friends of Olympic athletes watching the televised action live at the Olympic Family & Friends Experience at the Loews Sapphire Falls Resort at Universal Orlando in Orlando, Fla., Friday, July 30, 2021. Parents, siblings, friends and former teammates crowd into the ballroom at the resort daily to watch the Summer Games and bond with others in a similar situation, all of them unable to be in Tokyo to root on their loved ones competing for gold because of the coronavirus pandemic. (Stephen M. Dowell/Orlando Sentinel via AP) 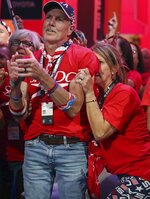 The mother of swimming superstar Caeleb Dressel reeled off a makeshift seating chart for the couch, directed everyone who wanted to be on television where to stand and even scoured the posh hotel for life-sized, cardboard cutouts of her son. She found four and lined them up behind the 40-strong Dressel posse.

She then asked if the coffee table was too cluttered with empty wine glasses and water bottles. Nope. After all, it was an accurate portrayal of this party scene.

The Dressels were among hundreds who accepted an offer to spend part of the Tokyo Olympics at Universal Orlando with other equally disappointed friends and families of American athletes, all banned from traveling to Japan because of the coronavirus pandemic.

They gathered more than 7,000 miles from Tokyo in a crowded ballroom at a resort with hundreds of strangers – at least at first – and created a red, white and blue-themed blowout that rivaled anything they would have experienced abroad.

It turned out to be a support system like no other.

“These people are great,” said Venus Jewett, whose son Isaiah failed to make the 800-meter final after tangling feet with a fellow runner in a semifinal heat. “They get it. … Being here, it’s not like being over there, but it’s a good consolation prize. You can’t get much better than this.”

Parents, siblings, friends and former teammates crowd into the ballroom at the Lowes Sapphire Falls Resort daily to watch the Summer Games and bond with others in a similar situation, all of them unable to be on hand to root for their loved ones competing for gold.

They spend mornings and nights together, smiling and laughing, eating and drinking, screaming and cheering. They’re usually celebrating and occasionally consoling.

Team Dressel was the main event during the swimming competition, with Christina Dressel and Caeleb’s photogenic wife, Meghan, taking center stage for an entire week.

Universal Orlando and NBC invited The Associated Press inside for a sneak peek on the night Dressel set a world record in the 100-meter butterfly and won his third of five gold medals at the Tokyo Games. Most of his crew wore red Speedo T-shirts with Team Dressel printed on the back.

They posed for pictures on the stage, cramming shoulder to shoulder underneath a Team USA banner, and led “U-S-A, U-S-A” cheers that have become a nightly lead-in to NBC’s television coverage.

Christina Dressel quieted the raucous crowd as soon as her son entered the pool area half a world away, eager to hear everything the commentators had to say about her son.

Dressel’s inner circle — his mom, dad, wife, sister and brother — were directly in front of one of two scoreboard-sized projection screens inside the ballroom. Christina and Meghan stood as soon as the race started. His sister joined them. His dad and brother reluctantly followed.

The roars reached a fever pitch when Dressel made the turn in first place, on pace to break the world record. His mom ducked behind his dad for a few seconds, too nervous to watch. But she quickly emerged and started jumping up and down as it became clear Dressel was about to make history.

Christina and Meghan collapsed onto the couch as Dressel touched the wall first. The celebration was just getting started. Mom eventually hugged everyone around her, including Dressel’s Orlando-based agent who was videotaping the rowdy scene for a documentary on his pandemic-altered path to Olympic glory.

Dressel’s family members rented a house in Orlando and routinely took advantage of the hospitality lounge, which was open for breakfast every morning and for dinner and an open bar at night. The emotional video of them trying to chat with Dressel following his second gold medal went viral, bringing extra attention to the family and the venue.

Universal Orlando, NBC, the U.S. Olympic Committee and two sponsors, including Japanese automaker Toyota, offered each Team USA athlete plane tickets and four days of accommodations to the resort and Universal’s three theme parks for two family members or friends. They had the option to purchase more passes.

The lounge serves as its own entertainment district, a full bar in the middle of the ballroom and televisions and tables in every direction. Toyota put several cars on display, including one that could be taken for a virtual test drive and another with a colorful paint job inspired by Dressel’s tattoos. There are games galore, too; table tennis, cornhole, a giant “four to score” board and an extra large Jenga setup.

But those other Games get way more attention.

Jewett brought her 17-year-old daughter, 82-year-old mother and 79-year-old father to the hotel for several days. A former collegiate sprinter and current fifth-grade teacher in Inglewood, California, Jewett had saved for years in anticipation of traveling to Tokyo with her son.

Even after a yearlong delay and a seemingly endless stretch of uncertainty, she was as devastated as any Olympic parent when Japan decided to ban spectators. She settled for Orlando and ended up making new friends and creating lifelong memories.

She was at the lounge when Katie Plum’s daughter, Kelsey, led the United States to a gold medal in 3-on-3 basketball.

“It’s sad to not be there,” said Katie Plum, who moved from San Diego to Las Vegas to be closer to her WNBA daughter. “But this has made it super fun and I’ve learned a lot. But, of course, I’d like to be in the USA House in Tokyo. I’m just grateful they got to go.”

Plum and her family spent two days at Universal Orlando and proudly offered to show off a voicemail from Jill Biden congratulating them on Kelsey’s gold. How did she miss a call from the first lady?

“We were waiting in line at Harry Potter,” she said, laughing and shaking her head.

She didn’t miss out on nearly as much while attending the lounge, getting drawn into rugby, rowing, track and other sports.

“We’ve been on all kinds of (emotional) trains,” she said. “You end up trying to support everyone you meet. And you appreciate when people get invested in your kid and want to watch. So you want to give back and sit over by somebody’s couch. I’ve watched some amazing games, stuff I might otherwise not have gotten to see.”