Olympic flame handover ceremony in Athens to be closed 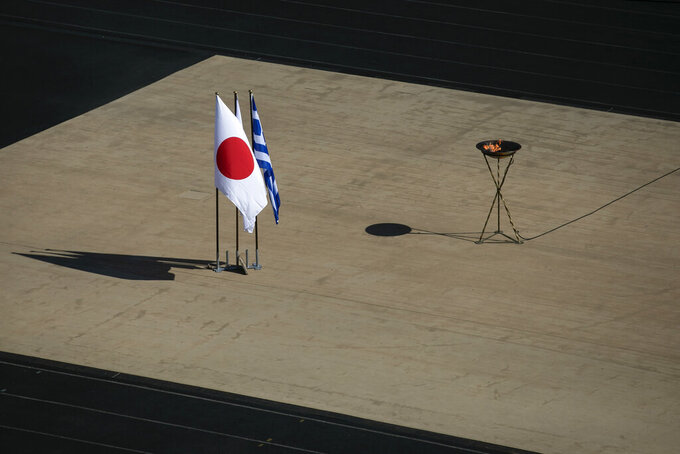 The Japanese flag flies next to an altar with the Olympic Flame of the Tokyo 2020 Olympic Games, inside the Panathenian stadium, in Athens, Sunday, March 15, 2020. The Panathenian Stadium will be closed to the spectators on Thursday, March 19 during the handover ceremony of the Olympic flame for the Tokyo 2020 Olympic Games as a precaution against the spread of the coronavirus. The vast majority of people recover from the new coronavirus. According to the World Health Organization, most people recover in about two to six weeks, depending on the severity of the illness. (AP Photo/Yorgos Karahalis)

ATHENS, Greece (AP) — The Olympic flame handover ceremony for the Tokyo Games will take place without spectators in an effort to contain the coronavirus outbreak, the Greek Olympic committee said Monday.

The committee said the accreditation cards that had been issued for Thursday's ceremony at the stadium in Athens where the first modern Olympics were held in 1896 would not be valid. The body's headquarters will also remain closed from Monday until further notice.

The committee canceled the remainder of the Olympic torch relay last week after crowds gathered in southern Greece to watch part of the torch relay in Sparta, where the torch was carried by actor Gerard Butler.

Greek health authorities have warned people to stay home, and have shut down everything from restaurants, bars and cafes to public organized beaches, ski resorts, hair salons and movie theaters, in an effort to curb the spread of the virus.