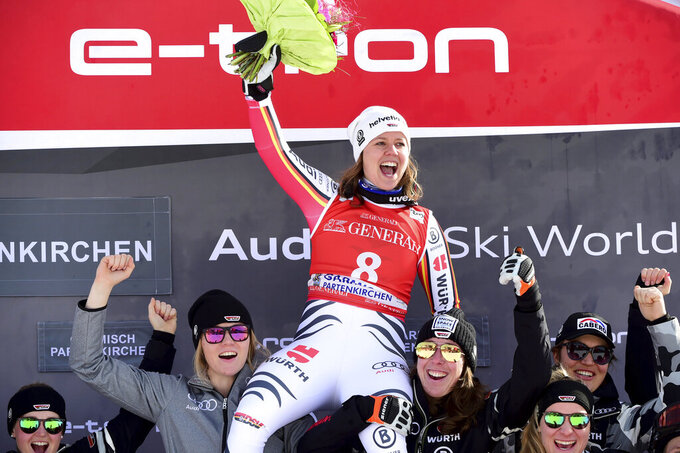 FILE - In this Saturday, Feb. 8, 2020 file photo, first placed Germany's Viktoria Rebensburg celebrates on the podium of an alpine ski, women's World Cup downhill, in Garmish Partenkirchen, Germany. Rebensburg, who won the Olympic gold medal in giant slalom in 2010, announced her retirement Tuesday, Sept. 1, 2020 at the age of 30 after an injury. (AP Photo/Marco Tacca, File)

BERLIN (AP) — Olympic ski champion Viktoria Rebensburg retired from the sport on Tuesday, saying an injury from last season was keeping her from performing at her best.

The 30-year-old German, who won the gold medal in giant slalom at the 2010 Vancouver Olympics, was injured in a crash during a World Cup super-G race in February in Garmisch-Partenkirchen — a day after taking her only career downhill win in front of her home crowd.

“After my injury in spring (and) the past two months of snow training, I realized that I would no longer be able to reach my absolute top level,” Rebensburg wrote in an Instagram post. “With the memory of my last race weekend in Garmisch and the victory in the downhill, it is a nice time to leave the winter sports stage.”

Rebensburg had only one World Cup podium finish when she won Olympic gold in Vancouver. She was sixth after the first run in heavy fog but beat Tina Maze to the gold by .04 seconds after the second run was delayed to the next day.

Rebensburg developed into a consistent medal challenger in the following years, especially in giant slalom, and won an Olympic bronze in the same discipline at the 2014 Sochi Games. She became the face of the German women's team when three-time Olympic champion Maria Höfl-Riesch retired that year.