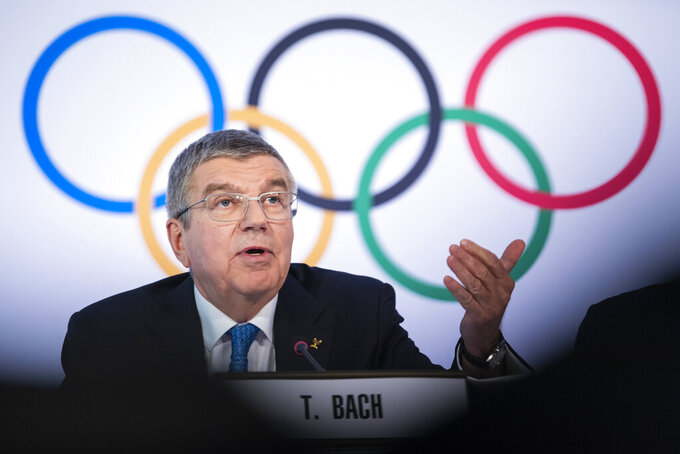 GENEVA (AP) — Regional Olympic officials on Wednesday rallied around the IOC and backed its stance on opening the Tokyo Games as scheduled, as direct criticism from gold medalist athletes built amid the coronavirus outbreak.

Leaders of continental Olympic groups praised the IOC after a conference call to update them on coronavirus issues four months before the opening ceremony in Tokyo on July 24.

“We are living through an unpredictable crisis and as such, it is important that we have one policy, expressed by the IOC, and we follow that policy in unison,” the Italy-based European Olympic Committees said.

However, when the International Olympic Committee published an interview with its president, Thomas Bach, after a separate call with athlete representatives, it prompted a four-time Olympic champion to urge postponing the games.

Bach acknowledged that many athletes were concerned about qualifying events being canceled, but noted that there were still four months to go until the games are set to be opened.

“We will keep acting in a responsible way in the interests of the athletes,” Bach said.

British rowing great Matthew Pinsent wrote on Twitter that the comments from Bach, his former IOC colleague, were “tone deaf.”

“The instinct to keep safe (not to mention obey govt instructions to lock down) is not compatible with athlete training, travel and focus that a looming Olympics demands of athletes, spectators organisers,” Pinsent wrote. “Keep them safe. Call it off.”

On Tuesday, one of the IOC's 100 members had broken ranks in a rare public criticism of the body's unwavering strategy.

“I think the IOC insisting this will move ahead, with such conviction, is insensitive and irresponsible given the state of humanity,” said Hayley Wickenheiser, a four-time Olympic hockey gold medalist from Canada.

Wickenheiser, who is training to be a doctor and was voted to the IOC by fellow athletes at the 2014 Sochi Olympics, wrote on her Twitter account she was elected “to represent and protect athletes.”

Her concern about athletes’ troubled preparations for Tokyo — “as facilities close and qualification events are canceled all over the world” — were echoed by 2016 Olympic pole vault champion Katerina Stefanidi.

“The IOC wants us to keep risking our health, our family’s health and public health to train every day?” Stefanidi wrote on Twitter. “You are putting us in danger right now, today, not in 4 months.”

Neither Wickenheiser nor Stefanidi, who is a candidate for athlete elections scheduled for Tokyo, directly cited IOC president Thomas Bach, who has urged competitors to prepare “with full steam” for the games.

Responding to the criticism, the IOC said it was “counting on the responsibility and solidarity of the athletes.”

Wickenheiser sits on the official IOC athlete panel, which is chaired by Olympic swimming champion Kirsty Coventry. Coventry is a member of the IOC executive board and has been a loyal Bach supporter on athletes' rights issues.

On Tuesday, the IOC repeated its steadfast stance after a conference call with sports governing bodies, many of which have not completed qualification events for Tokyo.

“There is no need for any drastic decisions at this stage; and any speculation at this moment would be counter-productive,” the IOC said.

That message was repeated after Wednesday’s conference call by IOC executive board member Robin Mitchell, the interim leader of the group of national Olympic bodies known as ANOC.

“We share the view that we must be realistic, but not panic,” Mitchell said in a statement released by the IOC on behalf of the Oceania Olympic group.

The Rome-based European Olympic group did acknowledge the “unprecedented disruption to our daily lives caused by the outbreak of COVID-19.”

“The athletes of the Americas are facing issues to complete their usual training schedules and take part in competitions,” said PanAm leader Neven Ilic, another IOC member.