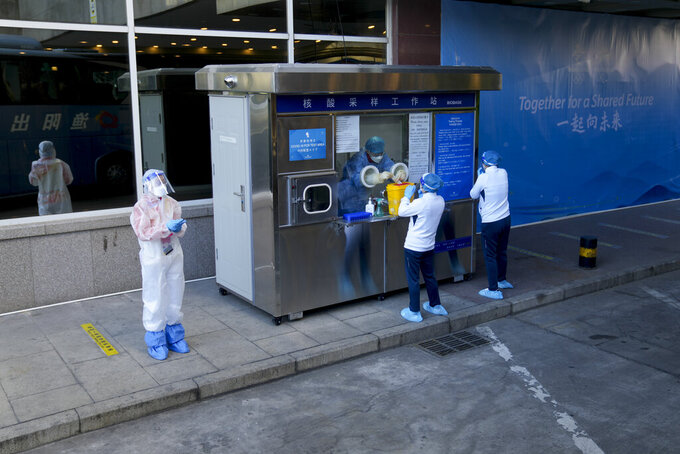 BEIJING (AP) — More than 30 athletes at the Beijing Olympics are in isolation facilities after testing positive for the coronavirus, organizers said Tuesday. The average stay in isolation is seven days.

“We will allow as many people out of isolation as we can, but only as many as we can do safely,” said Brian McCloskey, chairman of the expert medical panel for the Beijing Games. He said 50 athletes have been discharged and the vast majority of athletes in isolation are well and do not require any medical treatment.

The disclosure that 32 athletes are in isolation facilities came after complaints by athletes and teams about inedible food, dirty rooms and a lack of training equipment and internet access. Organizers have acknowledged that isolation is already a difficult situation for athletes — who face the possibility of missing competitions after years of training — and said they were working to quickly address any problems.

To prevent the spread of COVID-19, Beijing organizers are requiring everyone in the so-called Olympic bubble to take daily PCR lab tests. Those who are confirmed positive are taken to an isolation facility until they’re cleared for discharge with negative tests. People who keep testing positive can also request a review by a medical panel.

McCloskey noted that people who were infected can continue testing positive intermittently for a long time, even if they’re not contagious. But he said previously infected people might also be testing positive because they were re-infected, and are able to spread the virus.

“The challenge is to distinguish the two,” he said.

Organizers said they expect the number of positive cases to decline as new arrivals into the Olympic bubble taper off, since screening procedures are intended to catch the virus early and prevent it from spreading.

McCloskey noted that everyone in the bubble is being tested and that nearly everyone has been vaccinated.

“I think your chance of picking up COVID in the closed loop is less than anywhere else in the world,” he said.

So far, there have been 393 positive cases inside the Olympic bubble. In addition to athletes, the figure includes news media, team officials and others inside the bubble. More than 12,800 people have arrived from outside China for the Olympics.