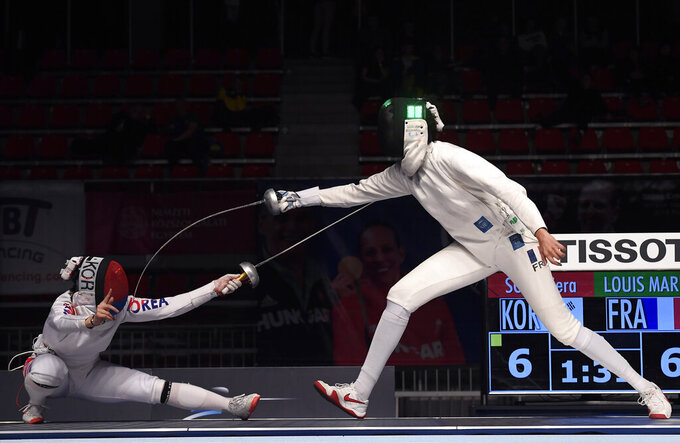 LAUSANNE, Switzerland (AP) — Olympic qualifying in fencing was suspended indefinitely when the governing body canceled all international tournaments on Thursday for five weeks because of the coronavirus outbreak and the American ban on travelers from Europe.

The International Fencing Federation, known as the FIE, postponed the Grand Prix starting in Anaheim, California, on Friday, four World Cups and the Olympic zonal qualifiers that were the last chance for nations that have not qualified teams for the Tokyo Games.

With those World Cups ruled out, the Olympic zonal qualifiers couldn't be held in Cairo (Africa), Seoul (Asia), Madrid (Europe) and Panama City (Americas) from April 15-19, because spots in those only went to countries without qualified fencers.

“The FIE is working hard to ensure that events are held at a later date; however, everyone is looking to make sure that the health of all athletes from around the world is put first,” USA Fencing president Donald K. Anthony Jr said.

Also postponed was the junior world championships in Salt Lake City, Utah, from April 3-11, when more than 1,000 fencers from 100 nations were entered.