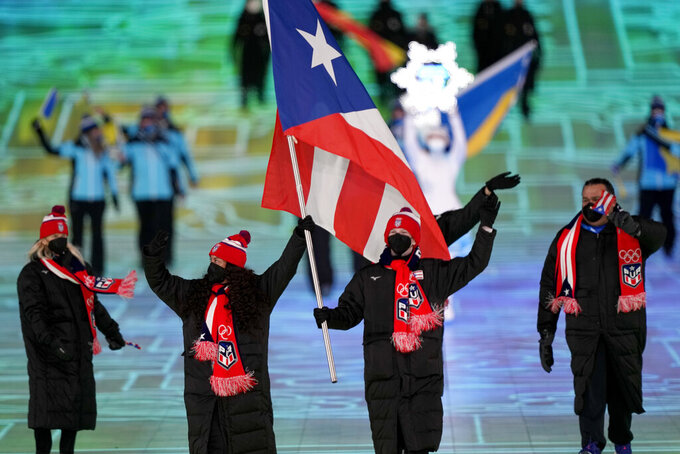 Kellie Delka and William C. Flaherty, of Puerto Rico, lead their team in during the opening ceremony of the 2022 Winter Olympics, Friday, Feb. 4, 2022, in Beijing. (AP Photo/David J. Phillip)

BEIJING (AP) — For a teenager whose chances of survival were slim when he was born, just making it to the starting line at the Olympics is a miraculous achievement in itself.

William Flaherty will ski for Puerto Rico on Sunday in the giant slalom at the Beijing Games. Although winning a medal is not really within his reach, his health and his studies are.

Flaherty was born in Cincinnati and moved to Puerto Rico when he was 6. He was diagnosed with hemophagocytic lymphohistiocytosis when he was 3. Known as HLH, it’s an often fatal disease where the immune system attacks the body’s organs.

“There were days we didn’t know if he would live through the day,” she said. “I’ll never forget holding my child and not knowing if he was going to live.”

The 17-year-old Flaherty has had more than 30 operations in his life, including a bone marrow transplant from his older brother Charles — himself a former Olympic skier. After the Beijing Games, Flaherty will have an operation to have part of his fibula removed and molded into a new jawbone.

“It’s just about every two years something annoying comes up,” said Flaherty, pointing out a scar on the right side of his face where he had a tumor removed two years ago.

Flaherty said even a cold can lay him up for two weeks, so he took extra precautions over the last two years amid the coronavirus pandemic. He spent more than a year in what he dubbed “super quarantine.”

“It definitely affected me. Not so much my training, but, like, the social life I get from my training,” said Flaherty, who trains in Colorado. “I was able to continue training, but I would have to wear an N95 mask the whole time and I couldn’t ride the lift with anyone, I couldn’t really talk to my friends in the start house.

“I would finish training, just come home and kind of hide in my bedroom, stay away from people as much as possible, which was kind of tough on me mentally … it was definitely pretty challenging mentally.”

As a teenager, Flaherty has had to balance his training with medical appointments and going to school.

He has managed to maintain straight A’s despite having to study on chairlifts and do final exams sometimes only days before racing. He had his English final three days before he left for Beijing.

Flaherty is one of two athletes representing Puerto Rico at the Beijing Games. Kellie Delka competed Saturday in women’s skeleton. The pair were flagbearers at the opening ceremony.

After the Olympics, Flaherty plans to take a year off from school to recover from surgery and then head to college to study aerospace engineering.

Hitting the slopes, though, gives him the respite from his health issues.

“Skiing is really helpful because it forces me to focus on one thing and once I’m on skis, I can only focus on skiing,” he said. “It’s a good way to take your mind off of the everything else that’s going on in our crazy lives.

“All my medical problems have definitely helped with my motivation. I really want to prove to all the other transplant survivors that they can do whatever they want in life. Just because you have medical complications in the past, it doesn’t define who you are today, and you can move on with your life and keep going and achieve whatever you want.”