With Olympics waiting, White climbs the podium in Laax 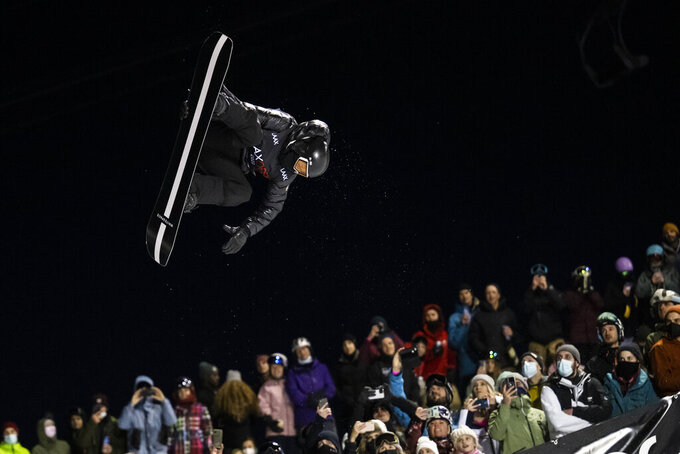 Shaun White of the United States, flies in the air during the final run of the snowboard halfpipe competition at the Laax Open, on Saturday, Jan. 15, 2022, in Laax, Switzerland. White finished third, marking his first podium finish since he won his third Olympic gold medal in 2018 and all but cementing his spot at next month’s games in Beijing. (Gian Ehrenzeller/Keystone via AP)

Shaun White finished third at the Laax Open in Switzerland, marking his first podium finish since he won his third Olympic gold medal in 2018 and all but cementing his spot at next month's games in Beijing.

White did not try his toughest combination of tricks in Saturday's final, but his back-to-back 1080s and his signature Double McTwist 1260 were part of an opening run that scored an 84 and was enough for third. White didn't try any flips on his second run.

The 35-year-old came into the event as the fourth-ranked American on the World Snowboarding Points list. By finishing as the top American in Laax, it virtually guarantees he'll earn one of the four men's halfpipe spots for the U.S. team that will be named next week.

Two-time Olympic silver medalist Ayumu Hirano won the contest to continue Japan's dominance on the halfpipe, and Switzerland's Jan Scherrer finished second. The Japanese have swept all the key run-up events to the Olympics this year, with the Winter X Games set for next weekend.

The triple cork — the three-flip trick that could win the Olympics — was on display in Laax. Hirano tried it one and Japanese teammate Ruka Hirano tried it twice, but neither man could land it cleanly.

Ayumu Hirano became the first man to land the trick in a competition at the Dew Tour in December, but he fell on his next hit and finished fifth. His winning run Saturday did not include a triple cork.

Australia's Scotty James, the 2018 bronze medalist who has been practicing on a private halfpipe, fell on both his runs and finished 11th.

Chloe Kim won the women's final — a victory that locked her in as the favorite to go back-to-back at the Olympics. It was Kim's fourth straight victory at Laax, a streak that dates to 2017.