As Pandemic Olympics wane, Japan asks: What did Games mean? 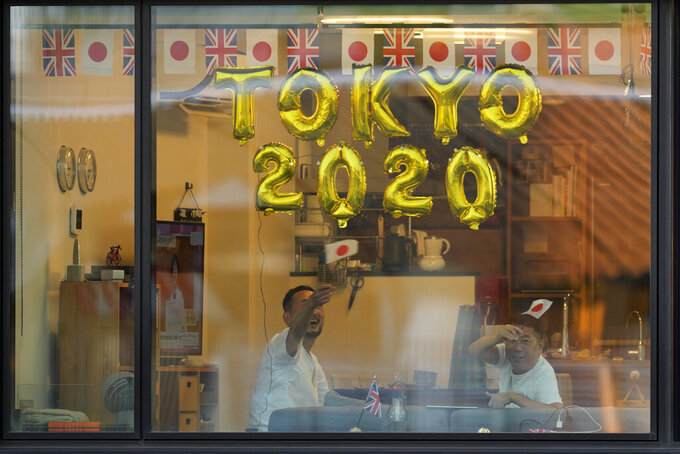 FILE - In this July 23, 2021, file photo, people look out their apartment window from a nearby building before the opening ceremony in the Olympic Stadium at the 2020 Summer Olympics in Tokyo, Japan. (AP Photo/Lee Jin-man, File)

TOKYO (AP) — Was it the strangest Olympics ever, staged during a deadly pandemic, with no fans? How about the angriest, awash in protests and fierce opposition from large swaths of the host nation?

The scariest, with fears of new coronavirus variants and surging cases plaguing Japan— though mostly dodging those in the Olympic “bubble” — throughout the two weeks of sports? Or maybe, as athletes banded together under moments of intense stress, the kindest?

As tens of thousands of athletes, journalists and officials get ready to pack up and leave Monday, Japan will be left to pick over the answers to these questions, maybe for years. Amid the lingering glow from the televised pomp and the indisputable athletic drama, whatever you call these Olympics, it’s worth stopping to consider how Japan sees them.

They were sold, well before the pandemic, as the symbol of Japan’s recovery from the destruction of the 2011 tsunami and nuclear meltdown. The rhetoric now tends to focus on their link to the world overcoming coronavirus.

But does that really work in a country where thousands are still getting sick each day, let alone in other, even worse-hit nations that have sent athletes to Tokyo? Many here, while proud that Japan is on the verge of pulling off what many thought impossible or, in some corners, highly inadvisable, still believe these Games were forced on the country and that their real cost, possibly in lives lost, is yet to be paid.

Others are simply relieved they are over. And a large number maybe even enjoyed the ride, reveling in the sports themselves, Japan's surprisingly strong medal haul and the generally hospitable way the world was welcomed during a period of illness, fear and uncertainty.

Using some of the dozens of interviews conducted during and before these delayed and disputed Pandemic Games, The Associated Press takes a look at what some Japanese think they mean.

Is it representative of a nation of 126 million? Of course not. But the glimpses into the views of some of the people who lived through this Olympics offer a chance to cut through, in sometimes surprising ways, the government and IOC rhetoric that emphasized harmony and revitalization, and get a bit closer to the heart of the nation's sentiment.

It started with a muted opening ceremony and an empty stadium, with moments so quiet that the shouts of protesters could be heard from the streets outside. Many residents watched with mixed feelings, to say the least, isolated from the Games by organizers trying to keep the Olympic visitors from mingling with the public, forced to modify their lives during a record wave of virus cases and yet another state of emergency.

Many were opposed, and that feeling persisted. But there was nuance, too — a desire to put the country's best face forward, now that the inevitable was happening, and a notion that this spectacle could act as a salve.

“I am very emotional and teary-eyed while watching the TV because even during the pandemic, the Olympics will still go on," Riza Nagumo, 53, a housewife, said. "I was praying so much to have this Olympics be a very successful event, to heal the world.”

At a normally bustling intersection in Tokyo's Shibuya neighborhood, large screens that usually blast advertisements and show television were switched off. Many bars and restaurants were closed, and public viewing locations across Japan were shut down amid rising infections.

“Everyone is just enduring this,” said Harumi Wada, a Tokyo resident. “But to hold the Olympics, despite everything, I feel there’s a dissonance, and I think that distrust toward the government is getting stronger.”

Despite the disruption, delays and disputes of these Games, the ban on spectators and big gatherings proved a surprising boon for some families.

While it's true that some bars and restaurants continued to see drinkers flouting pandemic restriction rules, even as late as Friday night, many Japanese stayed home with their relatives — and were delighted with the excuse to do so.

“We are often too busy in our daily life to have this kind of quality family time,” said Ikuko Tozuka, 53, who gathered with her husband and two adult daughters in front of their TV screen in Oiso, west of Tokyo, to watch the Games. “So I am very happy that this Olympics has given us an opportunity to be together.”

Hiroshi, the father, 58, even bought a new TV set to watch the Games with his family.

“It was actually good that this COVID-19 pandemic compelled us as a family to come together and watch the Games in this way,” said Yu, his 26-year-old daughter.

Throughout the Games, small knots of protesters gathered to provide voice to what a much larger, mostly silent chunk of Japan was thinking. They chanted, “Cancel the Olympics.” They carried banners reading, “No Olympics 2020 — Use that money for COVID-19” and “Is it more important than human life?”

Were these very public demonstrations representative of the whole country? It's complicated. Many said in polls they strongly opposed the Games; an unknown number may have been silently taking a wait-and-see attitude, hoping for the best.

In AP interviews conducted over the months between the postponement and the start of the Games, there could be found a feeling of resentment that the government had pushed ahead partly because of pressure from the IOC, which would have faced billions in lost television rights income without the Games. There was also fear over the Olympics spreading new strains of the coronavirus. The government’s main medical adviser said it was “abnormal” to hold the Olympics during a pandemic.

“It’s unethical to proceed with such a big event, with more than 10,000 athletes coming to Tokyo, all situated in one area,” said Masa Yamagata, a Tokyo resident. “We can’t enjoy it anyway. We can’t celebrate it.”

Along with the anger and fear, these Games had a nostalgic element for some older Japanese who remembered the Summer Games of 1964, when Japan celebrated its rebuilding from the war and the turbulent years that followed.

Some felt remorse — a sense of what might have been — because these Games would be so much more circumscribed than the last time they were in Tokyo.

There was also gratitude. Thanks to these Games, Seiichi Kuroki, 55, saw his relationship with his 85-year-old father, Masatoshi Kuroki, deepen as they talked about Masatoshi's role as a marshal at the opening ceremony of the 1964 Olympics.

"I am very grateful for that,” Kuroki said. “He looks happy when I ask him questions such as, ‘What were you doing then at the Games?’ Because that is his legacy. ”

There was a tinge of sorrow, however, for Takemasa Taguchi, as the 83-year-old remembered Tokyo’s celebratory mood in 1964.

“I am so sad about this situation,” Taguchi said. “I was hoping that we could have celebrated and danced together with people from all over the world.”

Some hoped the Games would bring change to Japanese society, where minorities still suffer from discrimination and prejudice. Few felt that the Games would solve all of Japan's social issues: Can an Olympics event ever live up to the expectations that are heaped on it? But with the world's attention focused on Japan, some saw movement forward on the issues they cared about.

Ahead of the Games, Makoto Kikuchi, a 34-year-old professional boxer, decided to come out as a lesbian.

“By speaking openly and becoming one of the out athletes, I hoped to be as helpful as possible for those who feel lonely,” Kikuchi said.

The Tokyo Games included 179 openly gay, lesbian, bisexual, transgender, queer and nonbinary athletes, according to Outsport.com. That's more than three times the number from the 2016 Games in Rio.

“It is truly great that a path has finally been created for athletes to be able to compete while being their authentic selves in sports,” said the 39-year-old, who was nominated to the Japanese Olympic Committee’s board of directors before the Games.