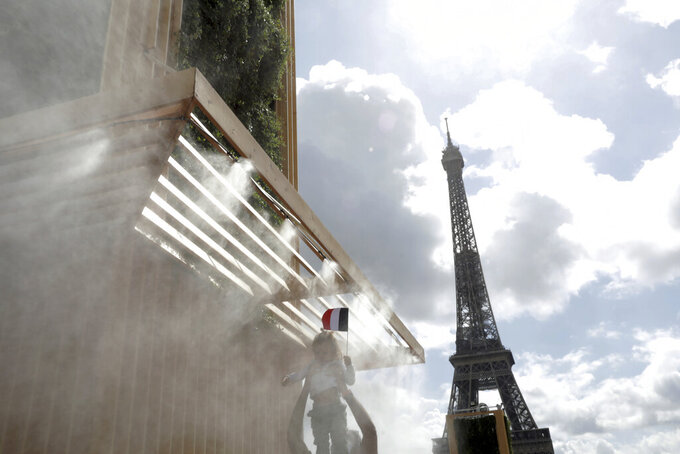 A man holds up a small girl clutching the French flag as they join others in the Olympics fan zone at the Trocadero Gardens in front of the Eiffel Tower in Paris, Sunday, Aug. 8, 2021. A giant flag will be unfurled on the Eiffel Tower in Paris Sunday as part of the handover ceremony of Tokyo 2020 to Paris 2024, as Paris will be the next Summer Games host in 2024. The passing of the hosting baton will be split between the Olympic Stadium in Tokyo and a public party and concert in Paris. (AP Photo/Adrienne Surprenant)

That thought, full of promise, has been a lifebuoy for athletes to cling to as they coped, as best they could, with thickets of restrictions at the pandemic-hit Tokyo Games that severely crimped their Olympic experience — and left some hungry for more.

Barred from bringing family and friends with them to Japan, playing in empty arenas and not allowed to sightsee in Tokyo, some athletes found themselves day-dreaming about the French capital's Olympic rendezvous in 2024. If the coronavirus is tamed by then, the Paris Games could quickly become the party games. Already, there is palpable pent-up eagerness among athletes to make up for Tokyo and its disappointments.

“When Paris happens, I’ll be like, ’OK, wow, like this is a whole new energy. This is it,'" said U.S. skateboarder Mariah Duran. “Maybe I had to have the appetizer before the whole meal.”

For now, Paris officials say they're betting that the pandemic will be over when their turn comes. “Normally, we'll be able to party,” the city's mayor, Anne Hidalgo, said Sunday on French TV when Tokyo passed the baton.

But if the coronavirus is still ruining the best-laid plans, then Tokyo has served up a model of how to hold an Olympics even as infections are surging. It pared the games down to their most essential ingredient: competition. No spectators. No city-wide partying. Very little mingling between Olympians and their hosts. Paris officials were watching closely and say that while they hope for the best, they'll also plan for the worst.

Toughest for many Tokyo Olympians was not being accompanied to Japan by loved ones who had no choice but to watch them compete on TV. American surfer Carissa Moore said it was “a huge challenge” being separated from her husband and his “strong constant voice."

Moore ultimately found her footing to win gold in surfing's debut as an Olympic sport. As painful as separation was, Tokyo was also a learning experience for the Hawaiian. “I’m very proud of myself, to be here and stand on my own two feet," she said.

Traveling without her parents for the first time at age 17, U.S. skateboarder Brighton Zeuner compensated by staying closely connected even during her competition, video-calling her father from the Olympic skate bowl “between every single run I did."

To limit infection risks, organizers also asked athletes to arrive in Tokyo no earlier than five days before competing and leave within 48 hours of being done — a rapid turnaround that further truncated the Olympic experience.

“It worked out for our puppy," she joked. But it wasn't the fairy-tale Olympics they'd planned before the pandemic.

“We'd hoped to like be here for a month together and, you know, I could see his event and he could stay for mine," Armanto said. “But because of COVID and everything ... ”

Armanto came away from Tokyo having not made up her mind about whether she wants to go again in Paris. In an Instagram livestream from the Olympic residential compound where athletes were largely confined when not training or competing, she was wrestling with cabin fever, complaining of rooms that “feel a little prison-like" and wishing that organizers hadn't barred athletes from going to watch sports other than their own in their downtime.

“I've circled the perimeter quite a few times because what else do you do here?" Armanto asked.

Not being able to pass the time at sports venues was a common complaint.

“That’s something I would have liked to have experienced as an Olympian, to go watch my other teammates, other than wrestlers, compete,” said Elias Kuosmanen of Finland, who wrestled in the Greco-Roman heavyweight class.

At the 2016 Olympics in Rio de Janeiro, Canadian volleyball player Nicholas Hoag took in gymnastics and track and field on off days, went out for drinks with teammates and otherwise absorbed the Olympic experience. But on days with no matches in Tokyo, “I was watching TV pretty much all day, watching all the sports.”

Another Canadian volleyballer, Ryan Sclater, said the pandemic games were “a real mix of amazing things and weird things" and somewhat blunted by social distancing and mask wearing. Athletes were asked not to mingle outside their teams and avoid “unnecessary” hugs, high-fives and handshakes — guidance they frequently ignored in the heat and joy of competition.

“We are not quite connecting in the same way that we normally could," Sclater said. "It’s funny being so close to all these amazing people who are here to compete but then not quite getting to know them in the same way as you might at a different Olympics.”

But because the pandemic delayed Tokyo by a year, Paris is now only a three-year waitinstead of the usual four.

“That is exciting, yes, to think about being able to do this again,” Sclater said. “To see even more of the beauty and coolness of people coming together and being able to really connect to the Olympics.”

By Anne M. Peterson 2 hrs ago
By Mutwiri Mutuota 5 hrs ago
By The Associated Press 8 hrs ago
11 hrs ago
12 hrs ago