Paris hosts 1900 Olympics, even though many didn't know it 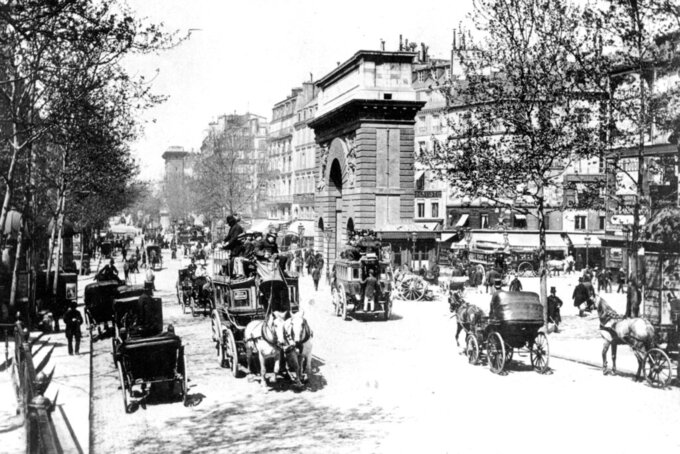 FILE - This 1900 file photo shows the eastern part of a busy boulevard in Paris, France in the year 1900. No opening ceremony. No closing ceremony. And many of the athletes at the 1900 Paris Games had no idea they even competed at the Olympics. But the second edition of the Olympics had female athletes competing for the first time. (AP Photo/File)

EDITORS — With the Tokyo Olympics postponed for a year because of the coronavirus pandemic, The Associated Press is looking back at the history of Summer Games. Here are some of the highlights of the 1900 Olympics in Paris.

No opening ceremony. No closing ceremony. And many of the athletes at the 1900 Paris Games had no idea they even competed at the Olympics.

Still, the second edition of the Olympics had something the first didn’t: female athletes.

Charlotte Cooper of Britain is believed to be the first female champion, winning the tennis tournament at Cercle de Puteaux in western Paris — on the other side of the Bois de Boulogne from present-day Roland Garros. She defeated Helene Prevost of France 6-4, 6-2 to win the title.

Cooper’s victory wasn’t exactly a surprise, even though the Olympic tournament was played on clay. She was already a three-time Wimbledon champion on grass and played in eight straight finals at the oldest of the Grand Slam tournaments. She went on to win two more titles at the All England Club over the next eight years.

And according to the International Tennis Hall of Fame, Cooper won her Olympic title despite being completely deaf.

“In a sport where the sound of a ball coming off the strings (is) such an integral part of playing, Cooper captured all but one of her (Wimbledon) titles without the benefit of sound, paramount in recognizing the pace of an opponent shot,” the Hall of Fame says on its website.

The Paris Games began on May 14 and finally ended on Oct. 28. They were held as part of the Paris World’s Fair — a decision that cost Pierre de Coubertin, a French baron and the father of the Modern Olympics, much of the control of the games, according to Olympic historian David Wallechinsky.

The overlap and affiliation with the World’s Fair, also known as the Exposition Universelle, and the extended duration of the games were key factors in diminishing their significance.

“The organizers spread the competitions over five months and under-promoted their Olympic status to such an extent that many athletes never knew they had actually participated in the Olympic Games,” the IOC website says in its section on the 1900 Paris Games.

Only 22 of the 997 athletes at the games were women, but there was still an overall increase of 756 competitors from the inaugural 1896 Athens Games. They competed in 95 events and represented 24 nations — 10 more than the previous games.

American teammates Ray Ewry and Alvin Kraenzlein were two of the biggest stars of the games. Ewry won three titles in one day, all of them in standing jump events. All three disciplines — the standing high jump, the standing long jump and the standing triple jump — have been discontinued. Kraenzlein won four events in three days: the 60 meters, the 110 hurdles, the 200 hurdles and the long jump. The 60 meters and 200 hurdles have been discontinued, but Kraenzlein remains the only track and field athlete to win four individual events at one Olympics.

The swimming events were held in the Seine river. That contributed to some fast times because the competitors swam with the current.

Cooper wasn’t the only Wimbledon champion to win in Paris. British brothers Laurie and Reginald Doherty won the doubles title, and Laurie also won the singles tournament. The younger Doherty brother advanced to the final when Reginald withdrew in the semifinals, supposedly because he didn't regard the Olympic tournament to be important enough. Reginald Doherty had just won his fourth straight Wimbledon tournament before the Olympics started, and Laurie Doherty went on to win five straight titles at the All England Club from 1902-06. Reginald Doherty and Cooper also won the mixed doubles tournament. There was no women's doubles.

The youngest Olympic champion may have competed in the rowing event at the Paris Games, but no one is really sure. A Dutch team in the coxed pairs event chose a young French boy to be their coxswain and then won their race. But the boy disappeared after the victory ceremony and historians have been unable to find out his age.