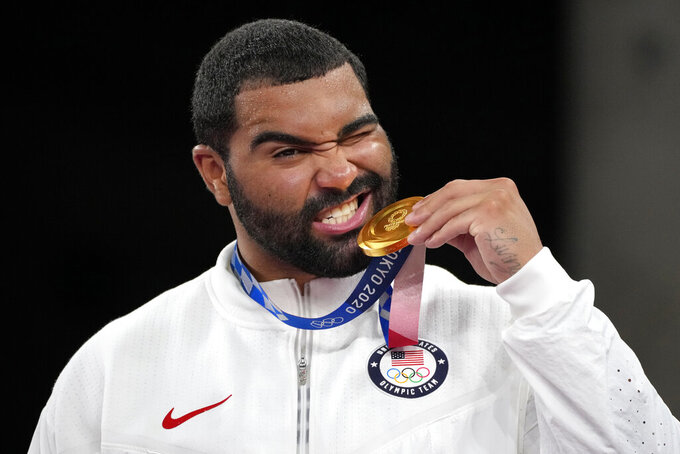 FILE - In this Aug. 6, 2021, file photo, United State's Gable Dan Steveson poses with his gold medal during the medal ceremony for the men's freestyle 125kg wrestling at the 2020 Summer Olympics, in Chiba, Japan. Gable Steveson knew his life had changed after he won an Olympic gold medal in wrestling. But the University of Minnesota star remains shocked by how fans have celebrated him this season during what has amounted to a college farewell tour. (AP Photo/Aaron Favila, File)

DETROIT (AP) — Penn State is favored to win its ninth team championship in 11 years at the NCAA wrestling championships, with Michigan and defending champion Iowa projected to be the Nittany Lions' top challengers.

The tournament at Little Caesars Arena in Detroit runs Thursday to Saturday.

Four of Penn State's nine qualifiers are seeded No. 1 at their weights, including defending individual champions Roman Bravo-Young at 133 pounds, Nick Lee at 141 and Carter Starocci at 174. Max Dean, who transferred from Cornell, is the top seed at 197.

Penn State's Aaron Brooks, the defending champ at 184, is a No. 2 seed after his loss to Michigan's Myles Amine in sudden victory at the Big Ten Tournament two weeks ago.

Michigan outscored Penn State by 1.5 points to win its first Big Ten title since 1973, and the Wolverines will compete for their first national wrestling team championship 45 minutes from its Ann Arbor campus.

The Wolverines have nine qualifiers, with Amine and Nick Suriano (125) seeded No. 1 and six other wrestlers among the top eight at their weights.

Penn State coach Cael Sanderson said his team hasn't spent any time stewing over finishing second to Michigan at the conference tournament. The Nittany Lions went 4-1 in the finals, with Brooks' narrow loss likely the difference in the team race.

“For the most part our guys wrestled pretty well at the Big Tens,” Sanderson said. “We got nine guys through... and we're ready to roll for nationals. The nationals really are what we focus on, and our guys know that. The past is the past. We're good. We're moving on.”

Lee noted that in 2018, when he was a freshman, Penn State was second to Ohio State in the Big Ten and then outscored the Buckeyes to win the national title.

Iowa joined North Carolina State and Northwestern as the only schools to qualify wrestlers at all 10 weights. The Hawkeyes won the title with a 10-man lineup last year.

Injuries have taken a toll. The Hawkeyes took medical forfeits in six matches at the Big Ten Tournament, including two in the finals. The Hawkeyes already are without three-time 125-pound champion and prodigious points producer Spencer Lee, who decided in January to have surgeries on both knees.

Iowa's highest seed is Jaydin Eierman, No. 2 at 141 and the runner-up to Nick Lee last year. The Hawkeyes also have two No. 3 seeds and two No. 5s.

This will be Diakomihalis' first NCAA Tournament since 2019, when he repeated as the winner at 141. He took an Olympic redshirt year the next season, and Cornell and the rest of the Ivy League did not compete last year because of the pandemic.

One of the memorable moments of the 2021 NCAA championships in St. Louis happened when Stanford's Shane Griffith won the 165-pound title as the No. 8 seed while wearing a black singlet in protest of the school's plan to drop wrestling and 10 other sports.

The Enterprise Center crowd, limited because of the pandemic, chanted “Keep Stanford Wrestling” as Griffith exited the mat, and he wore a hoodie bearing the same message. In May, Stanford announced it was reinstating all 11 sports.

Griffith returns to defend his title as the No. 5 seed. Four other Stanford wrestlers also will compete.

Oklahoma State’s AJ Ferrari, one of college wrestling’s rising stars, won’t defend his 197-pound title. He was 10-0 and the consensus No. 1 at his weight when his season ended after he was involved in a car accident in January and required surgery.

Steveson was able to return to college for a sixth season because the NCAA did not count 2020-21 as a year of eligibility because of the pandemic. He's won 45 straight matches and, in the likely event he wins another title, fans should look for him to perform one of his trademark backflips as he leaves the mat.