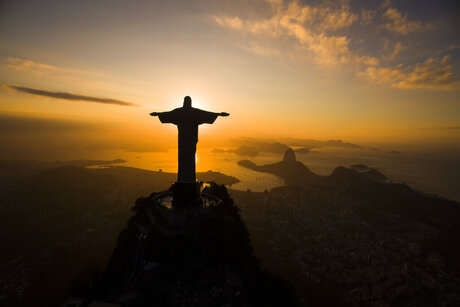 RIO DE JANEIRO (AP) — Two weeks away from the Olympics, nearly two out of three Brazilians believe that hosting them will cause the country more harm than good, an opinion poll said Tuesday as worries grow over crime and budget cuts.

Half of the people surveyed by Datafolha pollster oppose the big sporting event. The disapproval has doubled in three years, and the frustration is even greater in south and southeast Brazil, which includes the host city Rio de Janeiro.

The popularity of the Games has dropped dramatically as Brazil weathers a two-year-long recession, and unemployment and inflation shoot up.

Rio de Janeiro is one of the hardest-hit states. Plunging oil prices and a massive kickback scheme at state oil company Petrobras have depleted the state's accounts so severely that the state's acting governor declared financial disaster in June. The move gave officials the freedom to manage shrinking resources without breaking fiscal laws and opened the way for the federal government to send an aid package of $860 million to pay for security during the event.

About 85,000 police and soldiers will be working during the Games, twice the security contingent of London 2012, but experts worry about public safety after the event ends. Rio's murder and robbery rates have already gone up this year.

More than half of Brazilians think that the city's security problems are a cause of shame. Officers have staged protests to complain about salary delays and poor working conditions, with police stations missing basic items such as toilet paper.

At a recent demonstration in the airport, one group of police held signs in English reading "Welcome to Hell."

The state has also been skipping payments to teachers and retired workers.

On Monday, teachers protested outside the training camp for Brazil's soccer team, showing banners to the arriving players that read "Money only for Olympics. No money for public education."

Two tramcars of Rio's new light-service rail system built downtown as a legacy project for the Games were vandalized on Monday with spray-painted messages: "Fancy Transportation. Trashy Hospitals. What kind of country is that?"

"The amount that was spent on the Olympics could have helped hospitals that are closing," said Jessica Azevedo, a 23-year-old woman who works downtown. "They should have thought about public health and education first. That's where we are suffering."

Datafolha interviewed 2,792 people between July 14 and 15 in 171 cities. The margin of error was 2 percentage points.