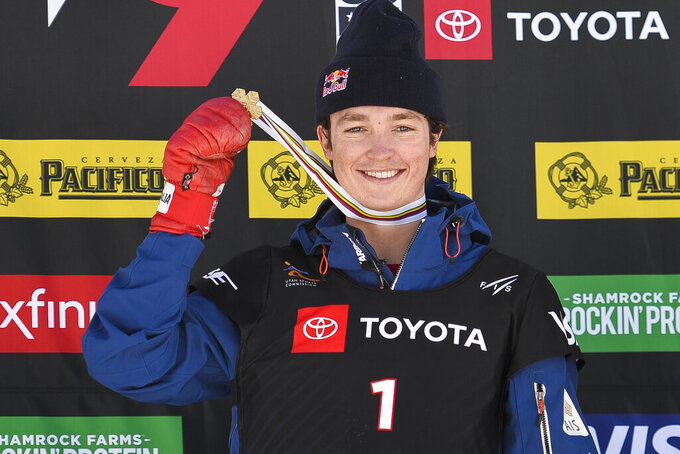 FILE - Gold medalist Scotty James of Australia celebrates after winning the men's snowboard halfpipe final at the freestyle ski and snowboard world championships, Friday, Feb. 8, 2019, in Park City, Utah. James envisions the best tricks at this year’s biggest halfpipe contests as the kind that only he can perform. One big question is whether the judges will agree. (AP Photo/Alex Goodlett, File) 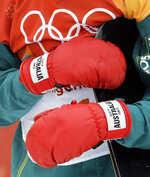 ASPEN, Colo. (AP) — On a private halfpipe in Switzerland, Scotty James schemed for the future.

The location became his own secret lab, t he Australian snowboarder joked, where he was free to experiment with new tricks and combinations, and keep everything under the radar.

Introducing James' newest creation: His spin on a triple cork, the three-flip jump that could be the trick needed to win a gold medal at the Beijing Games.

Never one to hold anything back, the 27-year-old might give the public a rare look at his latest concoctions at the Winter X Games on Friday, no doubt wearing his trademark red boxing-glove mittens (he views competitions as prize fights). It's a chance to give a tiny glimpse of what could be in store next month in China.

“I’m in a good position with that trick,” James said in a phone interview with The Associated Press. “It’s a big trick that requires a lot of energy."

It's a trick that a number of Japanese riders have these days, too. In December, two-time Olympic silver medalist Ayumu Hirano pulled off what’s called a frontside triple cork 1440, a jump that involves three head-over-heels flips with a twist while grabbing the board above the 22-foot-high halfpipe.

That was viewed as a game-changer on the halfpipe circuit. If the rumors prove accurate, James might have more than one version of the triple cork in his bag of tricks.

“For me, I’m defying the odds doing the triple cork in the halfpipe, which I'm super-excited about,” said James, a bronze medalist at the 2018 Pyeongchang Games, finishing behind Olympic champion Shaun White and runner-up Hirano. “I don’t know if you need a triple, but it’s going to be highly regarded is the best way probably to put it. That’s how I’m positioning it in my head.

“I think it’s better to have one than to not.”

Even without the triple, James has one of the most demanding — some might say, underappreciated — tricks out there called a switch backside 1260. Basically, it’s riding backward and twisting toward the top of the halfpipe while traveling down it.

James, who felt at the last Olympics that highly technical tricks such as his don't receive fair scoring, said he watched some contests that he didn't attend this winter and noticed that, in a strange way, things might be evening out.

“I did notice that since I wasn’t there, the riders didn’t tend to actually ride much switchback side or backside,” James said. “And I noticed that they were being docked for it from the judges. I would say that they (judges) definitely recognize it. I guess when maybe I’m not around, it’s not as much of a trick that really gets done. Once I’m back, obviously, it’s one of my strong points.”

James has come a long way since that day his dad bought him a tiny snowboard for $10 from a shop that was using it as a doorstop. He’s won three world championship titles, six World Cup races and three Winter X Games gold medals.

To elevate his game, James retreated to that private halfpipe in Switzerland. It’s a page straight out of White's playbook. The three-time Olympic gold medalist was set up with his own private halfpipe in Colorado before the 2010 Vancouver Games, where White perfected the Double Mctwist 1260 (two flips and 3 1/2 spins) on his way to gold.

“You get to just be in your own world,” said James, who’s sponsored by Red Bull. “You get to set your own goals. You don’t really have anything in the environment that’s really stopping you from being able to achieve what you have in your mind. So when you get to be on your own, it’s a pretty special moment.”

He felt almost like a scientist creating in a lab, kiddingly comparing himself to Dr. Evil, a character played by Mike Myers in the “Austin Powers” movies.

“It's where I concoct all my secret ingredients,” James cracked of the private halfpipe. “I look at it from my high tower and scratch my head and wonder, 'What am I going to do with an evil watch?’"

James recently orchestrated a move he's rehearsed over and over.

There were no flips or turns involved, but it provided as big an adrenaline rush as any contest. He dropped to a knee and proposed to his girlfriend. His heart was racing.

“I think I caught her by surprise,” said James. “You come up with all these great ideas of how you think it’s going to work out. But it usually never goes that way. I was trying to find the right words and anyway, I think she got the idea once I got down on one knee.”

There could be more things that sparkle on the horizon — possibly a medal at Winter X and perhaps another in Beijing. One thing's for sure: He won't be playing it safe at Winter X, even with Beijing around the corner.

"I want to win everything,” James said. “As an athlete, you don’t really hold back — ever."