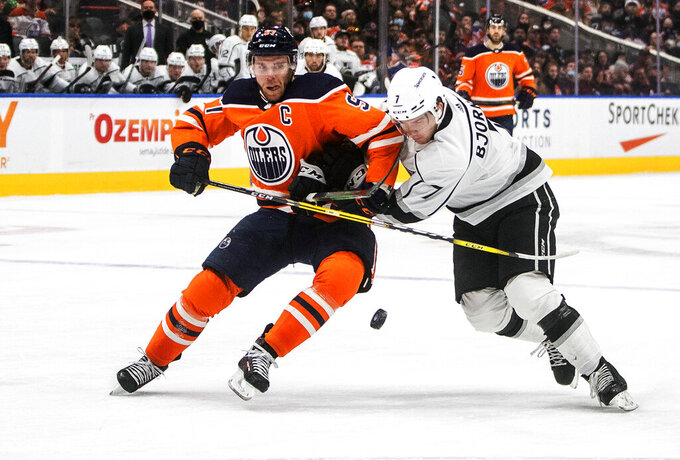 NHL MVP Connor McDavid calls the idea of potentially having to quarantine for up to five weeks in China following a positive COVID-19 test “unsettling” as the NHL’s participation at the 2022 Winter Games remains up in the air.

The Edmonton captain and one of three players already named to Canada’s provisional Olympic team spoke Tuesday as coronarivus cases and postponements continue to rise across the league.

“It’s obviously going to be a very fluid situation,” McDavid said before Edmonton hosted the Toronto Maple Leafs. “There hasn’t been a ton of information come out, and then there’s that three-to-five week (quarantine) thing ... it’s kind of been floating around. Obviously, it’s unsettling if that were to be the case when you go over there.”

The NHL skipped the 2018 Olympics in South Korea, but committed to Beijing as part of the extension to the current collective bargaining agreement signed with NHL Players’ Association. As recently as last week, Commissioner Gary Bettman said the plan was to go, but the NHL has until Jan. 10 to nix the plan without financial penalty if COVID-19 causes enough of a disruption to its season.

“I’m still a guy that’s wanting to go play in the Olympics,” McDavid said, according to The Canadian Press. “But we also want to make sure it’s safe for everybody. For all the athletes, not just for hockey players.”

The International Olympic Committee has said an athlete who tests positive for COVID-19 in China will need to produce two negative results 24 hours apart. If they’re unable to do so, the quarantine period could last from three to five weeks.

Vegas defenseman Alex Pietrangelo — named alongside McDavid and Pittsburgh captain Sidney Crosby as provisional members of the Canadian squad — said he was not sure if he will be going to China because of the potential of being away from family in a long quarantine. Golden Knights goaltender Robin Lehner, a Swede, has already said he will not go.

Medical experts for the league and players’ association have a previously scheduled meeting set for later this week to review COVID-19 protocols. All but one NHL player — Tyler Bertuzzi of the Detroit Red Wings — is believed to be fully vaccinated, though the league is currently only recomending booster shots.

Asked if the increase in positive tests and postponements were giving him flashbacks to March 2020 when the sports world and much of society ground to a halt, Calgary general manager Brad Treliving wouldn’t go quite that far.

“I don’t think anything is going to feel like that,” he said. “That was a cold slap (to the face).”

The NHL went to every Olympics from 1998 through 2014 before declining to send its players three years ago. Owners have always been lukewarm on the Olympics for a number of reasons, including the disruption to the league calendar.