Redmond's Finish Proves Race Not Always Won by the Swiftest 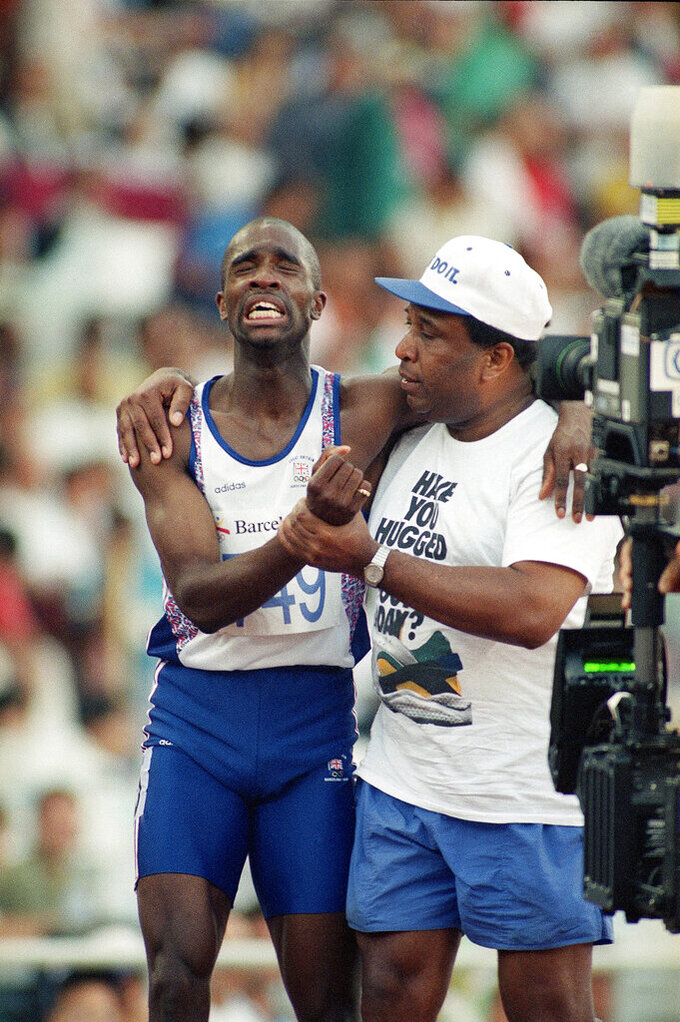 FILE - In this Monday, Aug. 3, 1992, file photo, Britain's Derek Redmond grimaces as he is helped from the track by his father, Jim Redmond, after an injury during the semifinals of the Men's 400-meter race at the Summer Olympics Games in Barcelona (AP Photo/Denis Paquin, File) 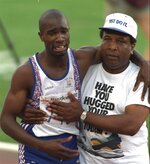 The official result alongside Derek Redmond’s name in the 1992 Olympic record book for the 400-meter semifinal reads “DNF”— Did Not Finish. Try telling that to the 65,000 people inside Barcelona’s Estadi Olimpic and a global TV audience of millions looking in on that fateful afternoon.

Nearly three decades later, the video of Redmond struggling up the track and crossing the finish line in his father’s embrace has more than 110 million views and will still make the hairs on your arm stand up straight. The British sprinter, then 26, tore a hamstring mid-race and dropped to the track, but refused to stay down. His determined effort to finish remains one of the most inspirational memories the Games has produced.

“Selfishly, I wanted to finish for my own reasons, and that is the dead honest truth,” Redmond recalled in a recent interview with The Associated Press.

That race was supposed to be one of the last steps in a painstaking comeback by Redmond, whose Achilles’ tendon flare-up forced a scratch just minutes before his first race at the 1988 Seoul Olympics. Instead, after he won both of his qualifying heats in Barcelona, that semifinal provided both the denouement of Redmon’s injury-plagued track career and a springboard to the varied vocations he’s taken on since.

He switched sports two years later and played professionally in the British Basketball League, then stayed on in the game as a TV host and commentator. He also raced motorcycles and co-owned a team, and is currently a motivational speaker based in Nottingham, England. The lesson he learned about himself in 1992 — “finding a way no matter how many times you get knocked down” — now provides the core of his presentations to athletes and business leaders.

At the Barcelona Games, once Redmond got back on his feet, he started galloping and then slowed to a hobble as officials on the track sought to get him medical treatment. But he refused until about 100 yards from the finish, “when the last person I expected to see was my dad.”

Jim Redmond had never coached his son, but instilled in him the kind of self-belief the old man used to great advantage as a 15-year-old immigrant to Great Britain. That same sense of purpose spurred Jim to leave his seat in the top deck of the stands and make his way down onto the stadium floor and the track without being deterred some of those same track officials.

The father-son bond remains just as strong today. Jim Redmond, now 80, and his wife, Jenny, live nearby and the two men still chide each other about their memories of that singular moment crossing the line, as the roar of the stadium crowd built to a thundering crescendo.

“To be honest, I don’t really remember it. I didn’t really register that side of things, at least not in the moment,” Redmond said. “My dad did, because as my dad goes over the line, he sort of puts his hand up as if to say, ‘Thank you’ to the crowd. … But at the time, I was so distraught and so upset that the last thing on my mind was the crowd.

“Now when I look at it, after the fact,” Redmond marveled, “it was unbelievable.”