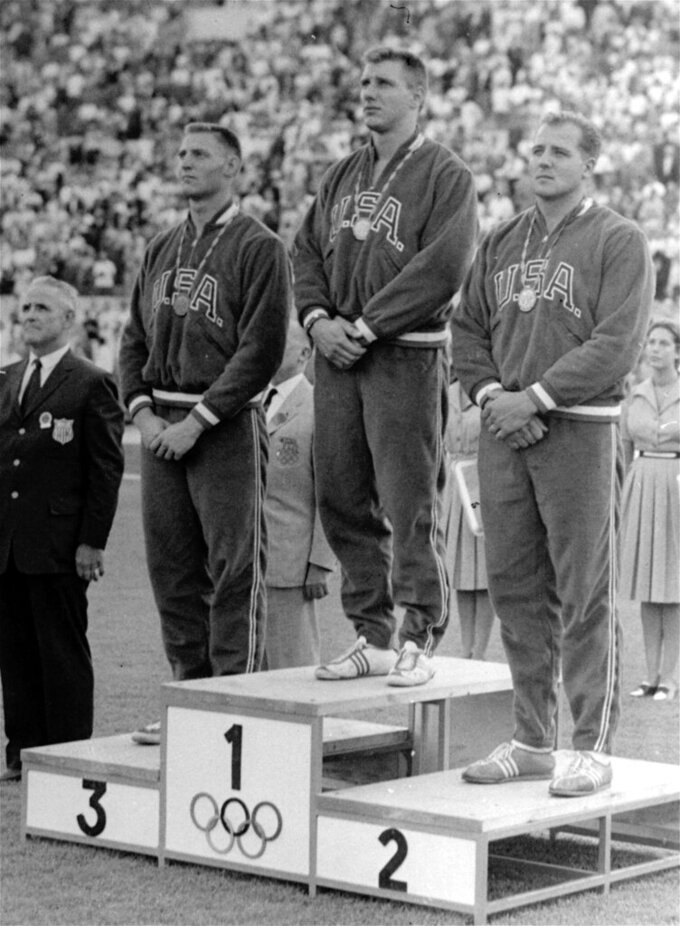 FILE - From left, American discus winners pose on the podium at the Olympic Games in Rome, Sept. 7, 1960. From left are bronze medalist Richard Cochran, gold medalist Alfred Oerter and silver medalist Richard Babka. Babka, a former world record holder who was part of a U.S. medals sweep in the discus at the 1960 Olympics, died Saturday, Jan. 15, 2022. He was 85. (AP Photo/File)

LOS ANGELES (AP) — Richard “Rink” Babka, a former world record holder who was part of a U.S. medals sweep in the discus at the 1960 Rome Olympics, has died. He was 85.

Babka died Saturday of congestive heart failure in a hospital, according to the University of Southern California, which was informed by his partner, Sharon.

Al Oerter and Babka were gold-medal favorites at the Rome Games. Babka defeated Oerter at the U.S. trials and tied the world record of 196.55 feet (59.91 meters) a month before the Olympics.

At the Games, Oerter broke his own Olympic record in the second set of qualifying round throws at 191.69 feet (58.43 meters). Babka exceeded the old mark three times and American teammate Dick Cochran did so once in the final. But only Oerter was able to lower his mark again with a throw of 194.16 feet (59.18 meters) to earn the gold.

Born Richard Aldrich Babka on Sept. 23, 1936, in Cheyenne, Wyoming, he starred in football, basketball, baseball, and track and field at Palo Alto High in Northern California before graduating in 1954. He attended nearby Menlo College before going to USC.

He lettered in track and field at USC from 1956-58, helping the Trojans win the 1958 NCAA track and field championship and tying for first place in the discus as a senior.

Knee injuries derailed Babka’s plans to play football and basketball at USC. He was inducted into school’s Athletic Hall of Fame in 2009.

He retired from competition in 1969. He later owned a beverage distributorship in Stockton, California, where he raised quarter horses and cattle.

Babka was an artist and had some of his work displayed with Art of the Olympians, which was started by his former teammate Oerter, who died in 2007.

Besides his partner, Babka is survived by sons Kord, Dirk and Beau and daughter Tanja.