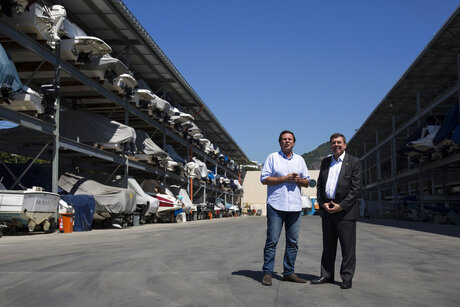 By: MAURICIO SAVARESE (AP), STEPHEN WADE (AP)
RIO DE JANEIROCopyright 2020 The Associated Press. All rights reserved. This material may not be published, broadcast, rewritten or redistributed.
-22.9028-43.2075

"There are no charges against the City Hall," Paes said as he inaugurated the new marina for the Olympics. "I know everyone is crazy to find (some), but there is nothing. We are working with a lot of seriousness here."

Paes has been a key games organizer but faces pressure over construction contracts linked to games projects.

Several construction companies behind Olympic projects are also embroiled in the massive bribery scheme at the state-run oil company Petrobras that is shaking the country.

"If you can cite one accusation against the Olympics, I will stop here right now," Paes told reporters. "Tell me one thing."

The giant Brazilian construction company Odebrecht is involved in many venues to other construction to ready the city. Company CEO Marcelo Odebrecht was recently sentenced to 19 years in jail for corruption connected to the Petrobras scandal.

Paes is also getting pressure from his own city legislature where Rio de Janeiro city councilman Jefferson Moura — a member of an opposition party — has asked for an inquiry into the contracts.

He has said he hopes to complete an investigation before the Olympics open on Aug. 5.

Federal police investigators involved in the Petrobras probe have said they are also looking into Olympic contracts. A main suspicion is that constructors fixed prices on projects.

A graft scandal would add to Rio's Olympic woes, which include severe water pollution in venues for sailing and rowing, the mosquito-borne Zika virus, and $500 million in cuts to keep the operational budget balanced.

Away from the Olympics, Brazil President Dilma Rousseff is fighting impeachment, and the economy is mired in the deepest recession since the 1930s, with unemployment at nearly 10 percent.