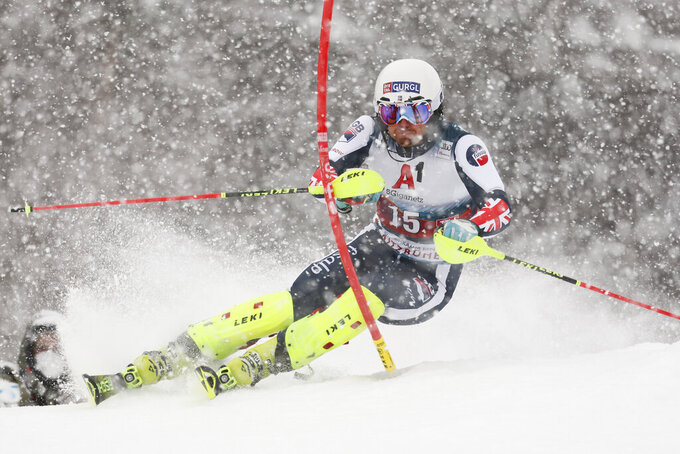 FILE - Britain's Dave Ryding speeds down the course during the first run of an alpine ski, men's World Cup slalom, in Kitzbuehel, Austria, Saturday, Jan. 22, 2022. When David Ryding gets to the start gate of the men's slalom at the Beijing Games on Wednesday, he knows expectations of a British skier will be high for once. Ryding became the first British winner in the 55-year history of the Alpine skiing World Cup, and on one of the circuit's most challenging slalom courses, when he triumphed in Kitzbühel last month. Now the 35-year-old is bidding to end his country's lengthy wait for a first Olympic medal in Alpine skiing. (AP Photo/Marco Trovati, File)

BEIJING (AP) — When Dave Ryding gets to the start gate of the men’s slalom at the Beijing Olympics on Wednesday, expectations on a British skier will be high for the first time in decades.

Ryding became the first British winner in the 55-year history of the Alpine skiing World Cup — and on one of the circuit’s most challenging slalom courses — when he triumphed in Kitzbühel, Austria, last month.

Now the 35-year-old Ryding, nicknamed “The Rocket,” is trying to end his country’s lengthy wait for a first Olympic medal in Alpine skiing.

“With success comes expectation. But like I always do, keep everything in perspective, do what I can, do the right things going up to it, getting my routine on the day and giving it my all."

Alain Baxter initially won Britain’s first Olympic medal in Alpine skiing when he finished third in the men’s slalom at the 2002 Salt Lake City Games, but he was later stripped of his bronze for using a decongestant that contained a banned stimulant.

The Beijing Games are Ryding's fourth Olympics. His best individual result is ninth — in the slalom in 2018 — but he knows he has a chance on Wednesday.

There have been six World Cup slaloms this season and six different winners. Only four skiers have even made the podium more than once and no one has done it more than twice.

“All I can say is this: six slaloms this year, six different winners,” Ryding said. “And on those six podiums, there’s been 14 different people. So one of those guys who’s had a podium has to finish 14th, it’s as simple as that.

The Olympic men’s slalom has somewhat of a tradition for producing gold medalists at a late age.

When Andre Myhrer — who was also 35 at the time — took gold in slalom at the 2018 Pyeongchang Games, he became the oldest winner of that discipline at an Olympics, breaking the record set by Mario Matt four years earlier.

And Ryding has always come late to things in skiing. He didn’t even ski on real snow until he was 12, having learned on dry slopes near his home in northern England.

Ryding had to wait until he was nearly 26 to break into the top 30 in a World Cup race, and until he was 30 to get a podium. He finally got a victory on the circuit at 35.

But his advanced years might serve as an advantage on Wednesday.

“I always try and keep everything I do in perspective. I’ve always been analytical myself and how I’m skiing and my results,” Ryding said. “I knew that skiing was in me even before that first. Now it just reiterates the fact that it is there. Don’t rest on your laurels. Keep working hard and bring out what you can on the day.”

In the speedy world of ski racing, tenths — or even hundredths — of a second can mean the difference between a gold medal and not even making the podium.

With slalom this season being all about “almighty tight, almighty fine margins,” Ryding knows there’s only one way to approach the race on the course known as The Ice River.

“I’ve had a ninth at the Olympics … so there’s no point trying to get another ninth. I may as well try and go better,” Ryding said. “And the only way to do that now, especially with slalom, is to risk it. And yeah, the winner will take it all.

“It’s all about the day and I am in the mindset of I will have to do or die.”