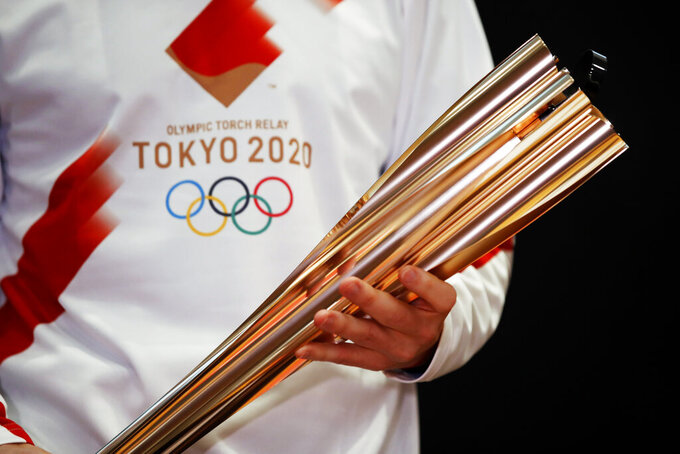 FILE - In this Feb. 24, 2020, file photo, Greek singer Sakis Rouvas wears the uniform of the torch relay runners in Athens, Greece, as he holds the torch of the 2020 Tokyo Olympic Games during a presentation of the torch relay within in Greece. A governor in a western Japanese prefecture is talking about canceling the torch relay events in his area for the Tokyo Olympics, Kyodo News reported Wednesday, Feb. 17, 2021. (AP Photo/Thanassis Stavrakis)

TOKYO (AP) — A governor in a western Japanese prefecture is talking about canceling torch relay events in his area ahead of the Tokyo Olympics.

Gov. Tatsuya Maruyama of Shimane prefecture on Wednesday said he was unhappy with COVID-19 prevention measures surrounding the relay. His prefecture has been largely untouched by the pandemic but he fears that could change.

“Tokyo has been the source of the nationwide infections,” Maruyama said in a briefing Wednesday. “This also affects Shimane."

He added it “may threaten out daily life.”

Maruyama said he also opposed the Olympics going forward, and he was dissatisfied with central government measures — and measures by the Tokyo metro government — to prevent the spread of the virus.

The relay is to pass through the small prefecture in May.

The torch relay is to begin March 25 in northeastern Japan and will crisscross the country with about 10,000 runners. The relay ends in Tokyo with the opening ceremony of the Olympics on July 23.

Concerns about the relay are reflected in general skepticism in Japan about holding the Olympics. Several polls have shown about 80% of Japanese think the games should be canceled or postponed.

Local organizers and the International Olympic Committee began rolling out the first edition of so-called Playbooks for the Games earlier this month.

The rule books explain in limited details how 11,000 Olympic athletes and 4,400 Paralympic athletes will enter Japan, compete, and then exit the country.

The Playbooks also spell out how tens of thousands of officials, broadcasters and media will enter Japan.

Tokyo and other prefectures have been under an emergency order since Jan. 7 because of the COVID-19 pandemic. New cases have recently been dropping in the capital after surging for several weeks. And after a late start, Japan began rolling out its vaccine campaign this week.